What is Puppet Theater?

It is a type of theatrical presentation that uses two-dimensional or three-dimensional puppets operated by actors called puppeteers, who are usually hidden from the audience behind a screen. Each of the many types of presentation is determined by the type of puppet used and the control system.

Puppets include marionettes, which are manipulated with strings, hand puppets (overhead), rod puppets, and mechanical puppets. Sometimes an object such as a block, ball, or stick, which metaphorically represents a living being, is used in place of a puppet. Puppets vary in height from several centimeters to twice the size of a human.

Normally puppet theater is a dramatic performance with figures and with dialogue or music provided by a puppeteer. It involves a puppet with a human, animal or abstract figure in its form, which moves with human rather than mechanical assistance.

Differences in the types of puppet theater presentations are generally conditioned by the staging, dramatic objective, national traditions and the influence of other types of art such as graphic arts, folk toys, sculpture, masquerade and cinema.

How did Puppet Theater develop?

Beginning in the 11th century, churches and monasteries presented shows that used puppets to dramatize scenes from the Gospels in which the main character was the Virgin Mary. The name Marion or Marionette remained in the Roman and German languages as a general term for the theatrical puppet.

In the Slavic languages, the name Marion designated the puppet theater (string puppets). Puppet theater performances became increasingly topical and secular and were consequently attacked by the medieval church. Banished from church chapels to the parvis, puppet performances were later staged in public squares and at fairs. The performances were banned by the Inquisition, but their anti-clerical and anti-feudal content continued to increase.

Puppet theater can be traced back to pagan ceremonies and plays with incarnated symbols of gods who personified the unknown forces of nature. One of the oldest forms of theatrical art, puppet theater generally used traditional plots and methods and stock figures. 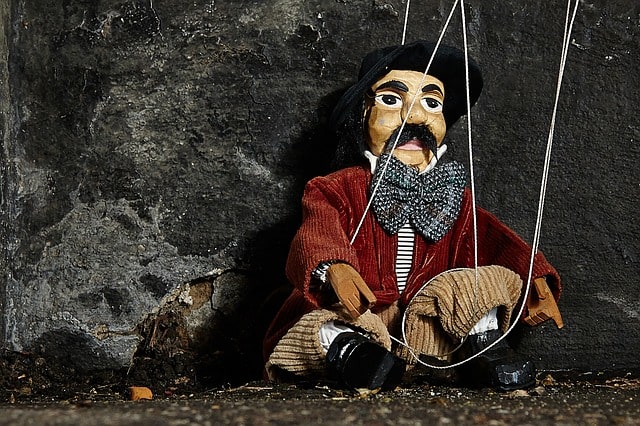 Puppet theater includes a multiple variety of shows and a diversity of types of puppets, but they exclude certain related activities and figures. Automaton figures moved by a clockwork mechanism that appear when a clock strikes a chime are not puppetry, and such elaborate automaton performances as those on the clock in the cathedral of Strasbourg (France) or on the clock in the town hall of Munich (Germany) should be excluded from consideration.

Because a common origin has been granted to human and puppet theater, one of the particular characteristics of puppet theater that have given it its special appeal and ensured its survival for so many centuries has been its complexity, for, no simpler to perform than human theater, it is more complicated, less direct and more costly in time and manpower to create.

However, once a show is created, it can offer the advantage of economy of personnel and portability, because one man can carry an entire theater (of certain types of puppetry) on his back, and a cast of puppet actors survives almost indefinitely.

Among American Indians, there are traditions of puppet figures used in ritual magic. In Africa, records of puppetry are scarce, but the mask is an important feature in almost all African magic ceremonies, and the dividing line between puppet and masked actor is not always easy to draw. It can be said with certainty that puppet theater has everywhere preceded written theater, and indeed any kind of writing, because it represents one of the most primitive instincts of the human race.

It is claimed that puppet theater is the oldest form of theater, the origin of drama itself. It is unlikely that all human dramatic forms have been directly inspired by puppetry, but what is certain is that from a very early period of man’s development, puppet theater and human theater grew up together, perhaps mutually influenced, because both have their origin in sympathetic magic, in fertility rituals, in the human instinct to represent what is often desired to occur in reality.

As puppet theater has developed, its magical origins have been forgotten, to be replaced by a mere childlike sense of wonder or by more sophisticated theories of art and drama, but the appeal of puppetry even to modern audiences is closer to a primitive sense of magic than most viewers may realize.

Representatives of this Theater

In European history the marionette represents the most advanced type that is capable of imitating almost any human or animal gesture. However, at the beginning of the 20th century there was a danger that it had reached a sterile naturalism that would not allow further artistic development.

Some puppeteers found the control of the puppet figure through the strings too indirect and uncertain to give the strong dramatic effects required and resorted to rod puppetry to achieve this drama. But, in the hands of a sensitive performer, puppetry remains the most delicate, if most difficult, medium for the puppeteer’s art.

Another representative of puppet theater is a type of cabaret show that became popular in the mid-twentieth century, in which the manipulator works in full view of the audience, who can, if interested, study the methods of manipulation. This is a far cry from the philosophy of the traditional European puppeteers of previous generations, who kept the secrets of their craft as if they were magic tricks.