What is Etruscan and Roman Sculpture?

Etruscan and Roman sculpture was dedicated almost exclusively to religious and funerary purposes. They used stone, although their most representative works were made in bronze and terracotta, clay modeled and fired in a kiln.

The Etruscans were a people of antiquity, geographically established in Tuscany, Italy, strongly influenced by the Greeks and Romans. Therefore, it is difficult to speak of their art, very rich in beauty and perfection, without linking them to the Greeks and Romans. For, their art is linked to the widespread passion among the Romans of their time for refined and luxurious objects to adorn their homes in a rich and splendid way.

Thus, there was by that time a new interest in art, which came to be regarded as a pleasurable embellishment of daily life and the progressive abandonment of the severe attitude of the time. Likewise, in the field of figurative arts, this brought about a progressive Roman Hellenization of art and culture, moving away from traditional ideas that had seen art as a corrupting influence on morals. Likewise, the sober purity of the ancient clay deities was widely accepted.

In this sense, the field in which the Etruscans, influenced by the Greeks, stood out the most was in bronze sculpture, the material from which the Capitoline She-wolf is made. In the same way, they modified the sarcophagi making them figurative to replace the other more ancient chests, so they were made of terracotta. On the lid of the sarcophagus was made the image of the deceased or of the deceased couple lying down, with a smile on their face, since the Etruscans looked at the afterlife as a daily affair, for this reason they recreated the funerary spaces with elements that the deceased had had in life.

How did Etruscan and Roman Sculpture develop?

The position occupied in Roman society by ancient art was still very inferior. Therefore, the work of the artist was considered unworthy of a free man and simply a mechanical activity fit for the slave class. Similarly, artists like Gaius Fabius, Pictor, who came from a noble family, was treated with contempt by Romans of his own social class because he had painted the temple of Salus, some 304 B.C. Even later, when artists painted works to evidence the greater glory of the republic, showing the course of victorious campaigns against the enemy (the very early triumphal painting, one of the most typical forms of Roman art), most artists were not Romans. Therefore, the artist in Rome never achieved the consideration and social status he had enjoyed in Greece, even when the passion for collecting works of art became a widespread activity among the upper classes. Likewise, it is known that the names of almost no Roman artist, of even the greatest masterpieces, are generally anonymous. Thus, Roman art seems to be a collective entity dedicated to the glory and commemoration of the state and its structure. None of this glory was reflected back to the artists.

Roman Sculpture whose most widespread form was portraiture with the underlying ancient basis of realism. Sometimes, especially in funerary reliefs, this realistic representation assumes analytical, naturalistic tones. In fact, the directness of the approach suggests possible connections with the idea of the wax mask that was obtained from the face of a dead person and then kept by his relatives as a monument. 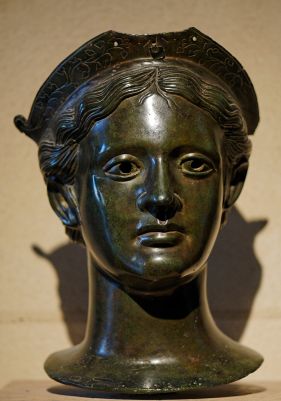 The Greek Influence on Roman Art

When it comes to Greece, everything was very different in their approach to art.  Thus, especially young people had to learn the practice of graphic arts, that is, painting on wooden panels. This fact was taken as the first step in the liberal arts and has always been celebrated with great honor to the extent that it has always been practiced by free citizens prohibiting the servile condition. There is no record in painting or sculpture of any slave work and it was only under the influence of the emperor Hadrian, when the practice of figurative arts was not despised.

During the first twenty years of the second century B.C., the conquests of Asia brought the Roman environment into direct contact with some of the great centers of Hellenism. Extending the artistic influence of Hellenism to Rome along with the conquest. Therefore, the second century B.C. was the time of the great urban transformation. It was then that the first monumental buildings, new bridges and aqueducts appeared. The forum gradually lost the aspect of a rural market, to go towards the acquired business of a modern city.  The basilicas became centers of economic life, likewise, the Greek influence was particularly noticeable in sculpture, in portrait statues, effigies and the forum became of honor and dignity of the citizens, a rather ancient tradition that had taken root in the second century.

The increase of Greek influence in Roman art, was given in sculpture and painting that assumed new dimensions and took a new decorative function. This demonstrates the great progress that was made as the cultivated and wealthy classes of Rome turned their attention to neo-aesthetics, copies of the famous Greek bronze and stone sculptures, using them to decorate their atriums, gardens, libraries and other environments. Even paintings in private homes, usually landscapes, were used as background decoration, as can be seen in the murals of the temple of Pompeii. Likewise, at the time of Caesar’s death, the cultural situation that prevailed in the early days of the republic was reversed, so that Rome had become the center of attraction for artists working in the territories subject to it and, moreover, was the center of the most significant artistic ideas.

In sculpture the great novelty was the relief that reached its maximum expansion. So it became narrative and historical, that is to say, through it, the diffusion of the facts of certain importance and historical transcendence was sought so that the people would know the great military campaigns of their emperors. The relief was based on realism, which differs from the Greek that stands out for a greater idealization. Therefore, the relief allows the characters of different ages to be recognized. In the same way, plant decorations such as grotesques stand out. Thus the relief is divided into three types: low relief, medium relief and high relief. Also in the design of the relief stands out the superimposition of characters to give the sensation of depth.

Christianity was not the main cause of artistic changes in antiquity. For, Christianity was only one among many spiritual movements that began in the East and flooded the Roman environment with rites, cults and sects. Thus, Christian art did not make an impression from something new, it was only one of the branches, and not the main one, of the art of the time. Instead of creating a new style or a new iconography, it made the necessary adaptations to pagan traditions and drew upon them. These adaptations came about largely because of the importance of this art to the provinces in general in the life of the Empire. The axis of imperial policy gradually shifted eastward, and it was in Rome that contests were often held. It was there also that political movements for autonomy flourished, while on the eastern frontiers of the empire it was more dangerous and warlike because of the enemies who continually threatened.

In this sense, the East was a land of very ancient culture and art, and it is not surprising that the original substratum of the different oriental cultures, came from Hellenism and Rome, which must have appeared at the time when the historical, philosophical and political assumptions about the domination of culture had been founded, and were entering a crisis. 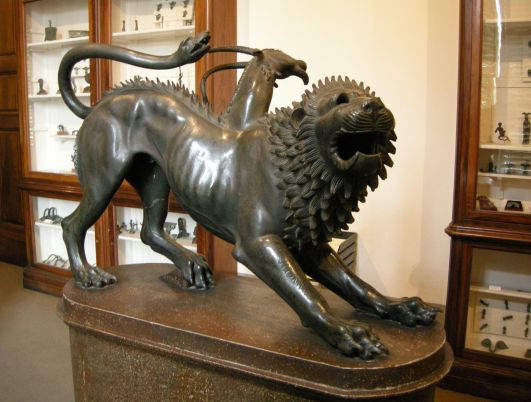 What is the legacy of Roman Etruscan Sculpture?

The greatest influence of the Etruscans was mainly in the techniques with bronze, which together with the Greek base served as a support for Roman portraiture. Therefore, what stands out most in this period is the work of bronze sculptures, as well as the extreme realism reflected in the faces created through the funerary masks.

On the other hand, in the empire, the idealization and magnification of the figure of the emperor took place. This fact is evidenced in the appearance of the emperor’s face, always the same in spite of time. Similarly, the portraits of the stern stand out, with the expression of feelings such as insecurity, anguish or fear reflected in their faces.

In the lower empire, realism and idealization disappeared, making the portrait more coarse and expressionist, highlighting the appearance of the eyes with greater volume and importance. Likewise, the surfaces are more ordinary, using hard stones from the East, such is the case of the colossal statue of Constantine.

In Etruscan ceramics, the terracotta technique was widely used in sculpture, to produce masks and decorate sarcophagi, both for domestic and funerary use.  Hence, the pottery recovered in the necropolises of Etruria, were taken to the cities of Greece and Magna Graecia, offered in the exchange and business between Etruscans and Greeks. However, it was found that along with these imported works, there were local imitations of these ceramics, especially those in the Attic and Corinthian style, with a more affordable price than the imported ones. However, the quality of the imitation was very high, and it was difficult to differentiate the original from the imitation.

The Etruscans worked in goldsmithing, making beautiful objects with ivory and amber for jewelry and body adornment. They also elaborated cosmetic objects such as combs, small vessels for perfumes and ointments. They also worked cut semiprecious stones for rings, necklaces and earrings, with great skill and attention to detail. Therefore, it is admirable the skill of these master craftsmen who, using such rudimentary tools, produced objects of such beauty. The other reason for their mastery may lie in the Greek influence on their works of art, which they imitated because they had great appreciation and value for their perfection.  Besides they had a special taste and identified with the Greek culture that resembled their own. However, they are considered by many analysts of the subject, as imitators with no intention of creating their own style, which is considered unfair, considering the beauty and perfection of their art.

Representatives of the Etruscan Roman Sculpture

Etruscan Roman Sculpture, like many of the works made in this period, has very few individual authors identified, since most of the works were not signed by the authors and remain anonymous. However, it could be said that Vulca is one of its representatives because he was an artist sculptor born in the Etruscan city of Veyes and it is believed that he is the author of the creation of the terracotta statue of Jupiter that was inside the Temple of Jupiter Optimus Maximus on the Capitoline Hill. It is also reported that this sculptor may also be the possible creator of the Apollo of Veyes and the Capitoline She-Wolf.