The Rococo Style, a style used primarily in interior design, integrating the arts of painting, architecture and sculpture, originated in Paris in the 18th century, but was soon adopted throughout France and later in other countries, principally Germany and Austria. It is characterized by lightness, elegance and an exuberant use of curves and natural forms in ornamentation. The word rococo is derived from the French word rocaille, which denotes the canopy-like rock work that was used to decorate artificial grottoes.

In this sense, Rococo sculpture is a technical definition used by art historians that does not necessarily imply a profound change from the Baroque. In fact the term ‘rococo’ insofar as it can be applied to sculpture should be understood as describing not a different style from baroque, but only a variation on the style brought to fruition by Bernini and his contemporaries. One can speak, however, about the qualities of the Rococo style in a work of sculpture, because of the characteristics of informality, cheerfulness, concern for matters of the heart and a conscious avoidance of seriousness.  Thus, in the eighteenth century opened in France in a mood of reaction against the extreme formality of the court of Louis XIV, this new spirit, which is expressed in the French academy, in which one can also see the unforced naturalism of the busts, even if at that time, sculpture could only presume to be just a medium adapted to express the subtleties of human behavior. 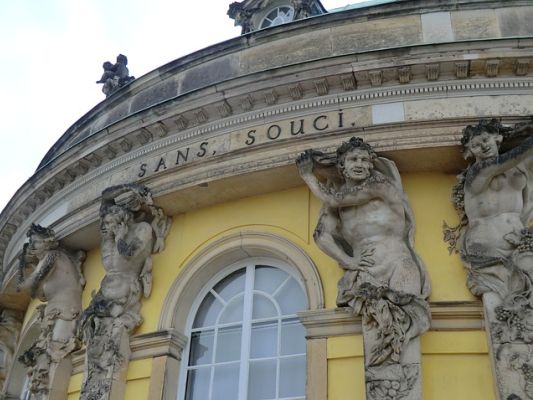 In this respect, the most extreme manifestation of Rococo in sculpture is to be found in Germany, although it is generally of a less sophisticated character than the decorative art of the salons of early eighteenth-century Paris. The sculpture produced in the German principalities in the eighteenth century is too diverse to permit generalization, but much of the best and most characteristic work of the period shows a remarkable continuation of the earlier spirit of the high baroque.  Thus Balthasar Permoser (1651-1732), the Dresden sculptor, studied in Italy in the latter part of the 17th century, but his desire to incorporate painterly qualities into sculpture was certainly derived from a study of Bernini’s works, and he left as a personal testament a now-destroyed group of paintings that embraced sculpture. Nevertheless, the elegance of his figures are undoubtedly a development of the late Baroque, and nothing illustrates more clearly the ambiguity of the term ‘Rococo’ than the art-historical style of these 18th century German works.

How did Rococo Sculpture develop?

Initially the Rococo style represented a reaction against the laborious design of Louis XIV’s Palace of Versailles and the official Baroque art of his reign. Several interior designers, painters and engravers, including Pierre Le Pautre, J. A. Meissonier, Jean Berain and Nicolas Pineau, developed a lighter and more intimate style of decoration for the new residences of nobles in Paris. In the Rococo style walls, ceilings and moldings were adorned with delicate interlacing of curves and counter-curves based on the fundamental “C” and “S” shapes, as well as shell and other natural forms, as asymmetrical design was the rule. Soft pastels, ivory white and gold were the predominant colors, and Rococo decorators used mirrors to enhance the feeling of open space.  Similarly, an excellent example of French rococo is the salon of Monsieur le Prince (completed 1722) at the Petit Château in Chantilly, decorated by Jean Aubert and the salons (begun 1732) of the Hôtel de Soubise, Paris, by Germain Boffrand. Likewise, the Rococo style was also manifested in the decorative arts. Its asymmetrical forms and rocaille ornamentation were quickly adapted to silver and porcelain, to French furniture of the period also showing curved shapes, the naturalistic form of shells and floral ornament and a more elaborate, ornamental, and playful use of gilt bronze and porcelain.

From France the Rococo style spread in the 1730s to the Catholic German-speaking lands, where it adapted to a brilliant style of religious architecture combining French elegance with South German fantasy, as well as a lingering Baroque interest in dramatic spatial and plastic effects. Some of the most beautiful of the Rococo are all buildings on the outskirts of France, such as those built in Munich, for example, such as the refined and delicate Amalienburg (1734 to 1739), in the Nymphenburg park and the Residenztheater (1750-53).  Likewise, many of these buildings were rebuilt after World War II, by François de Cuvilliés.

In Italy the Rococo style was mainly concentrated in Venice, where it was epitomized by large-scale decorative paintings by Giovanni Battista Tiepolo. The cityscapes of Francesco Guardi and Canaletto were also influenced by Rococo. Meanwhile, in France the style had already begun to decline in the 1750s when it came under attack by critics for its triviality and ornamental excesses, and by the 1760s the new, more austere movement of neoclassicism began to supplant rococo in France. 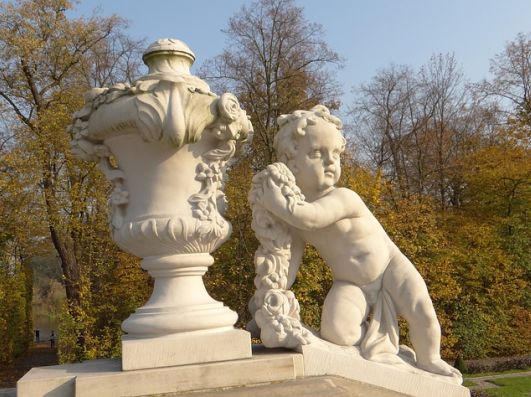 What is the legacy of Rococo Sculpture?

Rococo characteristics include the use of elaborate curves and scrolls, ornaments in the form of shells and plants, so, rooms had to be all oval in shape. The patterns were intricate and delicate in detail. Thus, the intricacy of the oval room in the French Hotel Soubise in Paris in 1740 compares to the autocratic gold in the chamber of King Louis XIV of France in the Palace of Versailles in 1701.  Thus, in Rococo, shapes were complex and not symmetrical, likewise, colors were often soft and pastel, but not without a bold touch of brightness and light.  The application of gold was useful.

However, while Baroque was more laborious, massive and overwhelming, Rococo is delicate, light and charming.  Nonetheless, even though not everyone was enchanted by Rococo, sculptural artists took risks that others previously had not. Likewise, Rococo painters were free not only to create large murals for grand palaces but also smaller, more delicate ones that could be displayed in French salons. Thus, like sculpture, paintings were characterized by the use of soft colors and blurred outlines, and both sculpture and painting used abundant curved lines, with plenty of ornamentation and lack of symmetry. Similarly, the subject matter of the sculptures of this period was bolder, so that some of the sculptural works are even considered pornographic by today’s standards.

While elaborate Baroque sculpture is found in France, Italy, England, Spain and South America, softer Rococo styles found a home in Germany, Austria, Eastern Europe and Russia. Thus, although Rococo was largely confined to interior decoration and the decorative arts in Western Europe, Eastern Europe was enamored with Rococo styles both indoors and outdoors. Compared to Baroque, Rococo sculpture tended to be softer and more elegant, with curved forms and pale colors dominating.  Likewise, Catherine I, Empress of Russia from 1725 until her death in 1727, was one of the great female rulers of the 18th century. The St. Petersburg Palace was begun in 1717 by her husband, Peter the Great. Thus, in 1756 it was enlarged in size and glory specifically to rival the Palace of Versailles in France. It is said that Catherine the Great, Empress of Russia, angrily disapproved of the extravagance of the Rococo. 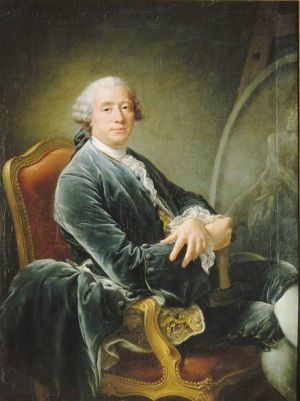 Who were the main representatives of Rococo Sculpture?

Probably the greatest sculptor of the first half of the 18th century was Guillaume Coustou (1677-1746), Director of the French Academy from 1707, who continued the Baroque trend of his uncle Coysevox. His major work, Les Chevaux de Marly, 1740-45, which now stand on the Champs Elysees in Paris, were originally designed for the gardens of Marly, another of Louis XIV’s residences.  Also, his pupil, Edme Bouchardon (1698-1762) is an interesting figure, whose feeling for antiquity led him to anticipate the later trend toward neoclassicism, as in his fountain in the Rue de Grenelle. Similarly, his equestrian statue of Louis XV, destroyed in the Revolution, was more severe than Girardon’s statue of Louis XIV, and was criticized by Cochin as too polished and finished, but, like the former, it was based on Marcus Aurelius in Rome, and despite the distance in time from Girardon is not very different in style.

Similarly, Bouchardon also shows himself to be a pioneer in his portrait of John, Lord Hervey, in which the torso is simplified into a deliberate imitation of an imperial Roman bust. Perhaps only one sculptural project really captured the nuances of amorous feeling that are associated with Madame de Pompadour’s circle and that belongs to the period when there were already hints against Rococo. Similarly, in German Rococo the finest churches are the Vierzehnheiligen (1743 – 72), near Lichtenfels in Bavaria, designed by Balthasar Neumann, and the Wieskirche (begun 1745-54), near Munich, built by Dominikus Zimmermann and decorated by his older brother Johann Baptist Zimmermann. G.W. von Knobelsdorff and Johann Michael Fischer also created notable buildings in the style, which used a profusion of moldings and decorations.

What is Rococo Sculpture? Characteristics