The Baroque Sculpture, most outstanding features

Traditional Baroque sculpture usually had two outstanding characteristics. First, it was technically perfect. The skill of Baroque sculptors constituted a true virtuosity in representing the appearance of human skin depending on whether the subject was male or female, old or young. Curls, draperies, different fabrics such as wool and silk, the texture of armor, all were perfectly imitated. Such was the mastery of the sculptors for their material that in statues carved in marble it is impossible to deduce or imagine the original shape of the block.

Michelangelo, the embodiment of the ideals of Italian Renaissance sculpture, had said that a statue should give the impression of being able to roll up and down a hill without being damaged. He could not have said it of Baroque sculptures. They have what might be called a photographic aim, to perpetuate a movement. This involves the use of free, loose design and also of the human form much more slender than those considered desirable by Renaissance sculptors. 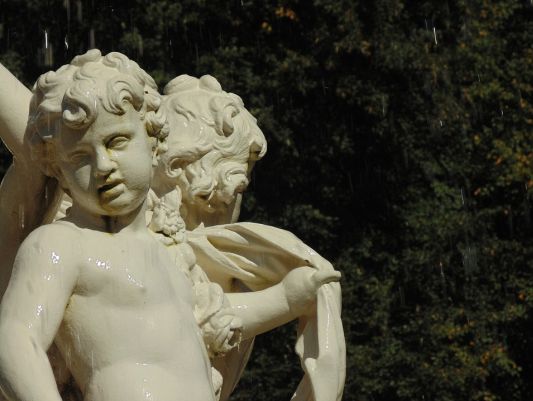 How did Baroque Sculpture develop?

In Baroque Sculpture the other special characteristic of the period – and the most important – was the appearance of movement. Thus, the figures are not represented in stillness or in attitudes of repose, but always in movement, and more typically in the moment of equilibrium which is the climax of the movement, the imperceptible but dramatic moment.  For example, when a jumper is in the process of jumping, but has not yet begun to descend and is motionless, in an attitude of potential, in the air. Similarly, when it was intended to portray Apollo pursuing Daphne, Bernini chose the most dramatic moment, the moment of the climax of the action, when Daphne transforms herself into a laurel tree to escape from the god.  Likewise, it was due to the preference for movement, the scheme known as the figura serpentinata, the serpentine figure, was very much in vogue in the seventeenth century, as a way of representing the human figure that began in the second half of the sixteenth century, the period immediately preceding the Baroque. This form facilitates the representation of the body in the act of performing a spiral movement, or in rapid rotation as in an athlete throwing the discus, or in a fight.  Sometimes the composition became exaggerated, in a suggestive way, more in agitation than in movement.

The artist was sometimes so enamored of the effects he produced, that his technical skill lost sight of the harmony of the overall composition. Such an effect was always likely, however, from the work of masters passed to that of journeymen. Therefore, the merit of the baroque was to create the conditions in which could be assimilated in a second work, the execution of complex works of greater artistic value. Such is the case of the great fountains inhabited by bearded figures, satyrs, nymphs, dolphins and a variety of monsters that adorned the squares and avenues of Baroque cities and gardens, the decoration of the grand staircases in the palaces of the time, to the stucco work and other profuse decorations of galleries, halls, churches, in every type of interior space. Similarly, in Baroque sculpture, extravagant effects might include swirling draperies or glittering gilding. So, while Southern Western Europe had embraced the true Baroque aesthetic (full Baroque), Northern Western Europe presented a compromise with the classical Baroque (restrained Baroque). As in the Renaissance, the Baroque is divided into:  Early, High and Late Baroque.

The early and high Baroque periods crossed through the career of Bernini, the founder and major master of Baroque sculpture, surrounded by his magnificent Cathedra petri (the chair of St. Peter), consisting of a throne, behind the altar in the cathedral of St. Peter, whose sculptural decoration, is the crowning work in extravagance of the high Baroque, being its most emblematic representations, Bernini’s statues with the ecstasy of St. Teresa and its numerous angels.

The High Baroque, flourished mainly in France, was especially well adapted to the figures.

No field is more congenial to the spirit of Baroque art than sculpture that was carried out on a visible scale. The Baroque artist achieves a dramatic pictorial unity by abolishing the traditional boundaries separating painting from sculpture and architecture. The massifs of sculpture and architecture were made to move in space by means of motif forms such as undulations, sculpture was transformed by richly varied devices of textures, illusionistic effects, colors, materials and irregular light effects.

In the late Baroque period, Italy was replaced by France as the cultural heart of the West. The architectural masterpiece of the period is the Palace of Versailles, with several fine late Baroque statues. These Versailles statues, embodying the aesthetics of the sober Baroque, can be considered the collective sculptural work of the late Baroque period. Likewise, stone was now completely emancipated in an open form and with an astonishing illusion of flesh, hair, fabric and other textures, with painterly effects that had previously been attempted only in painting. These qualities make the contemporaries called his “speaking portraits” seem unprecedentedly alive, portraiture in sculpture for two centuries being a variation on these innovations.  Similarly, in the statue of St. Longinus in St. Peter’s in Rome, Bernini created the characteristic formula of Baroque in sculpture, throwing the draperies in a violent agitation, of complicated breaks and involutions that rationally are not explained in the figure of real bodily movement that seem paradoxically formed as a miracle in themselves. Likewise, Baroque sculpture is characterized by the passion with which the sculpted figures are imbued, capturing the most transitory states of mind, reaching its apogee in the representation of works such as the ecstasy of St. Teresa in the Cornaro Chapel, Santa Maria della Vittoria, Rome (1645-52) and in the figure of Ludovica Albertoni in the Altieri Chapel, San Francesco a Ripa, Rome (c. 1674).

In this sense, the final phase of the Baroque gives rise to Rococo sculpture, which has a sense of dynamism and wastefulness. For, while Baroque art is overtly dramatic (and often violent), Rococo sculpture, however, was soft and playful. Therefore, Rococo sculpture flourished mainly in France, and was especially adapted in figures. 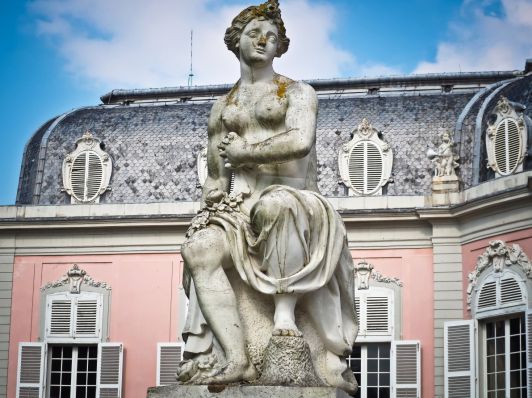 Who were the main representatives of Baroque Sculpture?

In Italy Stefano Maderno (1576-1636) sculptor of the first Mannerism/Baroque in Rome before Bernini, with his most emblematic work being the statue of Santa Cecilia (1600), in the Church of Santa Cecilia, Trastevere. Likewise, the early Baroque sculptor Francesco Mochi (1580-1654), with a work in sculpture equal to that of Caravaggio and Carracci, with his Angel Annunciate (1605-08), from the opera museum of the Duomo, Orvieto. Also, Francois Duquesnoy (1594-1643) Flemish painter, one of the best sculptors in Rome, with the statue of St Andrew (1629-33), in marble, in St. Peter’s Basilica, Vatican. Also, Alessandro Algardi (1595-1654) main exponent of Baroque classicism, being his most important work, the Tomb of Rome of Pope Leo XI (1634-44) St. Peter. Bernini (1598-1680) the greatest ever baroque architect and sculptor, with his work the ecstasy of St. Teresa (1647-52) in marble, in Capella Cornaro, Rome.

From France, we have:  Pierre Puget (1620-94) the greatest French sculptor of the 17th century, with his most representative work, the Milo of Crotona (1671-82), in marble, which is in the Louvre Museum, Paris. The French sculptors Gaspard and Balthasar Marsy (1624-1681), employed by King Louis XIV at the Palace of Versailles, whose work, the Horses of the Sun (1668-70), is in the Jardins du Château, Versailles. Likewise, Francois Girardon (1628-1715) along with Coysevox, considered the best sculptors of the reign of Louis XIV, with his renowned work of the Rape of Proserpina (1693-1710) in bronze, which is in the Palace of Versailles. Another French sculptor was Jean Baptiste Tuby (1635-1700), court sculptor at Versailles, with his well-known work of the stone fountain of Apollo (1671), Chateau de Versailles. Antoine Coysevox (1640-1720) sculptor of the court of King Louis XIV and his work the bust portrait of Charles Le Brun (1676) Wallace Collection, London. Also, the French late baroque sculptor Guillaume Coustou (1677-1746), his work, the horse of Marly, (1745) in the Louvre Museum, Paris.

On the other hand, from Germany and Austria, we have:  Jorg Zurn (1583-1638) South German Baroque, wood sculptor, with his altar of the church of Uberlingen. The work of the Virgin (1613-16), of the sculptor Balthasar Permoser (1651-1732) rather late baroque, with his carvings in wood, ivory, stone, marble. Likewise, the Apollo (1715) of Staatliche Kunstsammulungen, Dresden. Likewise, Andreas Schluter (1664-1714) one of the greatest sculptors of the German Baroque. Likewise, the equestrian statue of Frederick William the Great (1703), whose sculptor was Schloss Charlottenburg.

If you are interested in learning more about art, enter the space: Types of Art.