Definition of Neoclassical and Romantic Sculpture

The age of Neoclassicism and Romanticism both span roughly the late 18th and early 19th centuries. These movements flourished throughout Western Europe (especially in the North), the United States, and to a lesser extent Eastern Europe.  Similarly, two main forces contributed to the rise of Neoclassicism: the reaction against the extravagance of Baroque and Rococo and the renewed interest in antiquity due to the excavation of several important classical sites (including Pompeii and Athens). These forces compelled artists from all over Europe to collaborate in a classical revival.

On the other hand, many artists grew impatient with the constraints of classicism and baroque. So, instead of starting with a preconceived aesthetic structure (the stability of classicism) or the dynamism of baroque, these artists were guided by emotion, in an approach known as romanticism. Thus, the aesthetic structure of a Romantic work is not predetermined, but arises naturally as the artist strives to capture particular feelings. Meanwhile, Romantic art is also distinctive for a number of typical themes, such as nature, historical nostalgia and social struggle. 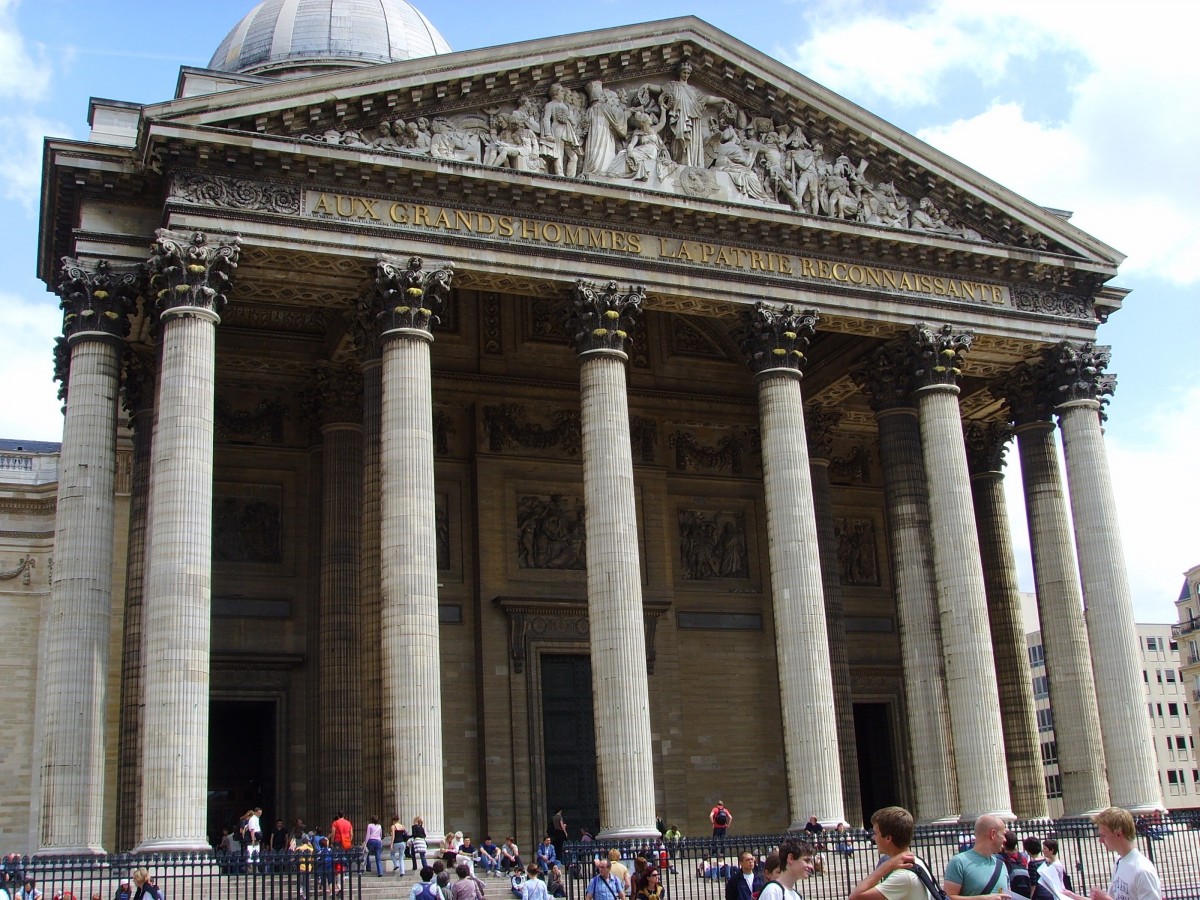 How did Romantic Neoclassical Sculpture develop?

Neoclassicism itself was created as a rejection of the ornamental and emotional forms of the Baroque and Rococo periods. Likewise, this current emerged in the 18th century and carried into the 19th century, as neoclassicism attempted to return to the sober and rational logic of European art. This happened through the revival of the original source of Western aesthetics, ancient ideology of the Greeks and Romans.  Therefore, the neoclassical sculpture takes the Greek and Roman forms that had been emulated from the mathematical harmony, with exact proportions, picking up the aesthetics of the ancient world. However, the ideology of this movement extended beyond sculpture to painting and literature. Thus neoclassical art was defined by its clear and intentional lines, in a proportional harmony and above all, a sense of rational logic.

Sculptors considered neoclassical such as the Italian Antonio Canova and the Danish Bertel Thorvaldsen, demonstrate in their works the principles of neoclassical and romantic sculpture in relation to the subject.  For example, Canova evidences the psyche awakened in his work, the kiss of Cupid, as he also produced under this current the heroic statue of Napoleon, as well as the statue of Christ and the lion of Lucerne. Thus, all of these sculptures of the new design are on view in the decorative arts galleries in the Getty Center’s West Pavilion.  Other recent acquisitions offer a prominent display of Romantic Neoclassical sculpture, including Pietro Cipriani’s Venus de Medici. Similarly, in terms of subject matter, sculptures, paintings, decorative arts and prints from these periods are shown contextualized, that is, located in time and space.

In this sense, another aspect that determined the creation of the neoclassical current, particularly in sculpture, which occurred between the eighteenth and nineteenth centuries, were the excavations of ancient archaeological sites in Greece and Italy in a desire to break with the fashionable styles of Baroque and Rococo sculpture, leading in the 1700s to a fervent desire to create a modern sculpture with the characteristics of ancient sculpture. Likewise, the ideal canon of beauty from Neoclassicism included pure silhouettes and forms in the classical European style defined by the predominant use of white marble and the adaptation of mythological subject matter.

In the same vein, Neoclassicism sought to break with previous art, but more importantly, it was based on the ideas of an important philosophical movement of the time, such as the Enlightenment. Thus, enlightenment thinkers challenged the traditions of European society that only what could be rationally or empirically proven could be trusted, as well as the ideas in much of Greek philosophy that individual justification was the only way to absolute truth. Taking the ideas of classical philosophy and reviving them, these enlightenment thinkers created the revival of classical artistic ideals.

The most outstanding characteristics of Neoclassicism are:

• The revival of the formal composition of Roman history.

• The use of diagonals showing the apex of emotion/momentum (as opposed to a regular moment).

The neoclassical period was one of the great ages of public sculpture. For, artists looked to Roman styles during the time of Alexander the Great for inspiration, as well as to imitate their style.

On the other hand, Neoclassicism had a huge impact in places like the United States. The Declaration of Independence is one of the clearest articulations of Enlightenment philosophy of all time, and the United States used Neoclassical art to create a symbolic parallel between its republic and the Roman republic. Even the U.S. Capitol was modeled after Roman temples. Thus, upon achieving independence, many countries in Europe had been reformed by the enlightenment, and as early as the 19th century, more artists began to reject the enlightenment approach because of the logic devoid of emotions and universal truths. Instead, they wanted to focus on individual imagination and emotion, giving rise to Romanticism.

Sculpture and design of this current occurs in Europe between 1780 and 1830, following the French Revolution in 1789, with Napoleon Bonaparte’s adoption of neoclassicism as the official imperial style, coining the style for the Empire, which contributed to the popularity of France’s neoclassical ideals and their imitation by European rulers. Thus, the curvilinear silhouettes that dominated the decorative arts were replaced by rectilinear ones, incorporating antique motifs.

Despite the early efforts of pioneers such as El Greco (Domenikos Theotocopoulos) (1541-1614), Adam Elsheimer (1578-1610) and Claude Lorrain (1604-82), the style that became known as Romanticism gained momentum until the end of the 18th century when the heroic element in Neoclassicism gained a central role in both sculpture and painting. This heroic element combined with revolutionary idealism produced the emotive Romantic style, which emerged in the wake of the French Revolution as a reaction against the established restricted academic art. Thus, Romantic sculptors and painters tended to express a personal emotional response to life, in contrast to the moderation and universal values of neoclassical art. Architects in the 19th century, therefore, also attempted to express a sense of romanticism in their building designs.

The Romantic movement, which emphasized the irrational in man and the sublime in nature, had its roots in the literary, visual and musical arts. Towards the end of the 19th century, a group of French and Belgian artists developed a style known as Symbolism, reflecting the spiritual and mystical philosophies of the time. Thus, Symbolism is a movement that originated in France in the 1880s, and paralleled post-Impressionism, emerging as a reaction to the realist approach implicit in Impressionism. Thus, the Symbolists emphasize that the work of art derives from an emotion provoked by experience. They seek through art, in this case sculpture, to externalize an idea, to analyze the self. In addition, they are interested in the ability to suggest, to establish correspondences between objects and sensations, mystery, the occult. They seek to express a reality different from the tangible, tending more towards spirituality. Thus, the symbolic becomes their instrument of communication, opting for figures in sculpture, which transcend the material with signs of ideal and strange worlds. Having an inclination towards the supernatural, the unseen, prioritizing the world of shadows. 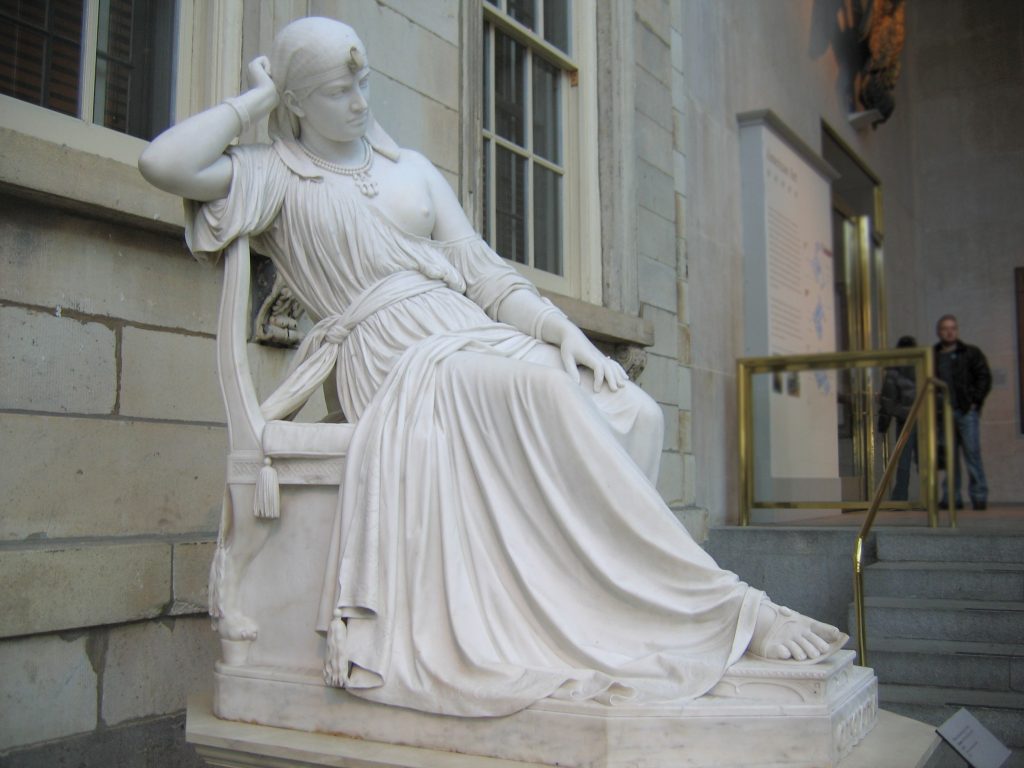 What was the legacy of Neoclassical and Romantic sculpture?

Hostile critics of Neoclassical sculpture tended to underestimate and devalue the works.  Some artists and theorists misunderstood the advocacy of Winckelmann and his school in imitating ancient art. Winckelmann’s meaning as well as the 17th century theorists before him in the opinion of writers such as Shaftesbury and Jonathan Richardson, influenced considerably, in the devaluation of neoclassicism as a current, since using imitation as a means of discovering ideal beauty and conveying the original spirit, and although Winckelmann did not advocate the slavish copying of antiquity or the elimination of the persuasive eloquence of action and intense expression, unfortunately unspiritual copies were made and this led to the classification of his works as idealistic. Likewise, in sculpture some of the important commissions unfortunately gave way to this lifeless concept of neoclassicism. Examples include the large marbles of John the Baptist, Christ and the apostles by the Danish sculptor Bertel Thorvaldsen in Copenhagen (1821 and 1842), in the Church of Our Lady. Likewise, Thorvaldsen’s marbles, unlike Canova’s, are as neutral as the plaster models and in fact the surface of the sculpture remained deliberately neutral.

Who were the representatives of Neoclassical and Romantic Sculpture?

The mainly neoclassical sculptors were the Italian Antonio Canova and the most famous work of Danish Bertel Thorvaldsen. Canova evidences the psyche awakened by Cupid’s kiss and also produced heroic statues of Napoleon. While Thorvaldsen’s works were the Christ and Lion of Lucerne.  Likewise, Canova, is considered the most important Italian neoclassical, the leading sculptor, in fact by far the most famous artist of any kind, in Europe at the end of the 18th century.  Thus, Canova’s position in the following 20 years can be compared only to Bernini in the 17th century.

What is Neoclassical and Romantic Sculpture?

Last update on May 28, 2021
Published May 28, 2021
Author: typesofartstyles
Categories: Sculpture
Tags: There are no tags for this post