What is Aegean Sculpture?

In the age of Aegean sculpture (3000-1200 B.C.) three main cultures appear: Cycladic, Minoan and Mycenaean. The Minoan and Mycenaean cultures (which were much larger than the culture of the Cycladic islands) are responsible for Aegean artistic production. The main exception is found in the pre-Palatian age (3000-2000 B.C.), during which the Cycladic were the most skilled sculptors of Aegean art. All Aegean cultures worked mainly in small sculpture (figurines, vases). Large-scale sculpture (e.g., statues, architectural sculpture) only became common among the ancient Greeks, who were inspired by the great sculpted works of Egypt and Mesopotamia.

The period of Aegean art encompasses works from the Greek area, in particular the Mycenaean, Cycladic and Minoan art. Therefore, Aegean art comprises these local arts that were located around the Aegean Sea. Likewise, the importance of this art includes architecture, painting, murals, sculpture and other art forms. Some critics claim that it is required to put together the art of these very different civilizations, because they were located very close to each other and were created in the same way. Because of this, it is difficult to make statements about this art and its effects on the movement of society. However, it can be said that all of them have influenced later art movements, including those of the present day.

The Aegean peoples were from seafaring and agricultural island cultures that valued aquatic life and nature. These three cultures, however, differed greatly in how they expressed their values in art forms: the Cycladics were minimalist, the Minoans were influenced by beauty, and the Mycenaeans were influenced by war and hunting. Each of these cultures produced smaller sculptures, mainly figures. The Cycladic culture produced sculptures very similar to modern sculpture, such as the Oscar figure and the Minoans went in the opposite direction with intricately carved or cast figures. The Mycenaeans focused on heavy metal worked into their sculptures. Homer is said to be from this area, which is why he plays this art has a prominent place in his works. He spoke of some of the major works of art from these islands that would not be seen for many years until they were rediscovered in the 19th century. 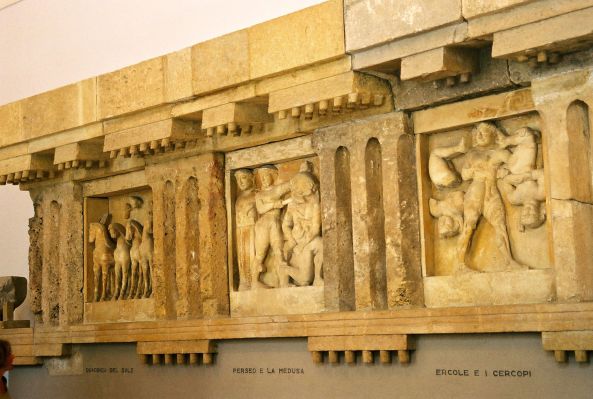 The Aegean sculptures of the pre-Palatian age are the Cycladic idols in marble: stylized figures whose faces are blank except for narrow triangular noses. Thousands of these sculptures have been discovered throughout the islands of the Cyclades, often in tombs. Most are individuals in a cross-armed position, although some are engaged in activity, and some are group sculptures. The smooth contours and simple geometry of these figures are eerily reminiscent of modern art.

Minoan Art gradually took shape throughout the pre-Palace Age, then flourished during the Palace Age. The Minoans sculpted in clay, bronze, ivory, and stone. They produced many figures both human and animal of bulls that were particular favorites. The largest surviving works of Minoan sculpture are a number of vessels, some carved in relief, others carved into figures (often the head of a bull). At the small end of the scale, the Minoans are famous for their delicately engraved stone seals, as well as fine gold work.

In the world of visual art, the term major arts is often used to denote large-scale architecture, painting and sculpture.  All other forms of visual art (including metal) are known as minor arts.

In the field of Essential Humanities the minor arts are rarely discussed directly. In some periods, however, one (or more) of the major arts is absent.  In the history of Western art, large-scale Aegean sculpture is divided into two periods: the Aegean Age and the Medieval period. In both cases, metal sculpture is characterized as unusually prominent.

The Minoan culture was named after the British Archaeologist who discovered it while excavating at Knossos on the island of Crete. Thus, Crete was home to the legendary King Minos and the Minotaur.

The Minoans were lovers of nature, beauty, sport, luxury and all these aspects were brilliantly painted in their frescoes. They made intricate gold jewelry, ivory carvings, nature-influenced sculptures and beautifully crafted ceramic images. Likewise, the architecture of the Minoan culture was decorative and highly advanced, including the home. Like the Egyptians, the Minoans celebrated their culture with fresco paintings and murals on their walls depicting courtly processions, acrobatics and images of daily life. In addition, they also painted scenes and patterns of aquatic life.

The greatest innovation in Aegean art was achieved by the Minoans. The Mycenaeans, however, were more cultural adopters than innovators, embracing Minoan culture as the foundation of their own culture. Consequently, the style and forms of Mycenaean sculpture are largely similar to those of the Minoans. As noted above, monumental sculpture was rare among Aegean cultures. The most famous and surviving example is the Lion Gate, with a pair of sculpted lions crowning one of the entrances to Mycenae, the grandest city of the Mycenaean civilization.  The most distinctive Mycenaean sculptures are probably the phi, psi and tau figures. Each statuette is named for its pose. Thus, the pose of each figure resembles the Greek letters phi (Φ), the psi statuette (Ψ) and the tau figure (Τ).

Sculpture of the Cycladic Age

The archaeological record shows Cycladic sculpture from the Mediterranean islands known as the Cyclades, and must have begun around 2600 BC. Since Archaeology and Tourism began in the late 1880’s in what were formerly agricultural communities, much of what remains of the art and culture has disappeared or been destroyed. Thus from the Cycladic artists we have the earliest known Greek sculpture, characterized by almost featureless faces on a simplistic oval head and often venus type figures. The simplicity of the Cycladic cultures is often compared to that of modern sculptors such as Henry Moore. Many of the sculptures have only a nose, or sometimes the outlines of the eyes. So, a sculpture of the Cyclades was presented at the opening of the Olympic Games in Athens in 2004. 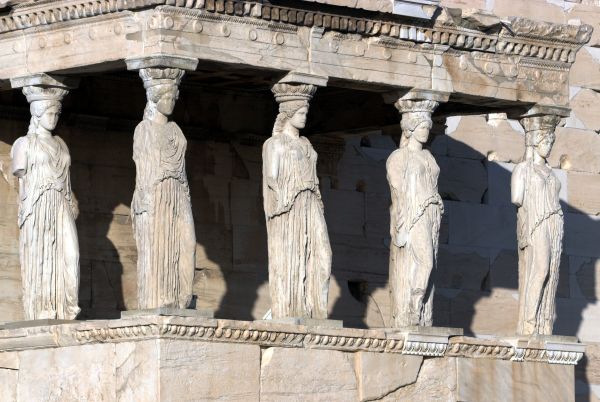 Most representative works of the Aegean Sculpture

Some of the most emblematic works of Aegean Sculpture are mentioned below, separated by each of the stages: