What is Renaissance Sculpture?

On the other hand, Mannerism was a distinctive secondary movement of late Renaissance art, and what characterizes it most is the deliberate pursuit of novelty and complexity. Thus, in Mannerist sculpture, qualities such as distorted anatomy (e.g., elongated limbs) and complex postures are part of the principles used for the construction of the works. Some late Renaissance artists worked in a complete mannerist style, while others were simply influenced by the movement to varying degrees. 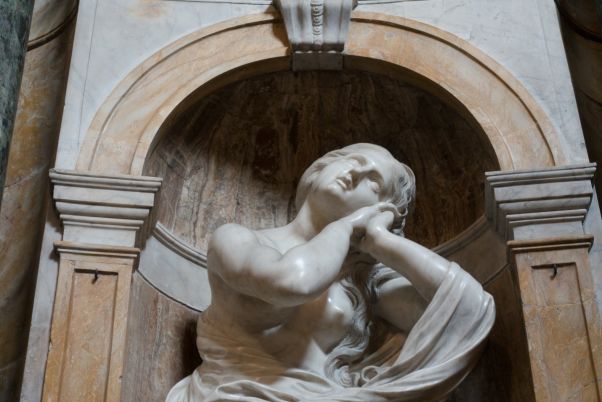 How did Renaissance Sculpture develop?

In relation to materials, Renaissance sculpture placed less importance on the use of precious metals, such as gold and silver, than did Gothic sculpture. Thus, bronze became a preferred material for Renaissance sculptors, not only because of its ductility and durability, but also because of its golden luster, to be employed first for reliefs, and then for statues, busts, portraits and minor elements. Even so, the casting of bronze remained problematic for some time, so, early Renaissance bronzes were not polished. However, in the High Renaissance, during the 16th century, these difficulties were overcome.

The increasing demand for intricate decorative detail in stone sculpture led to a significant increase in the use of marble and limestone, as well as fine sandstone and serena stone. Similarly, the use of white Carrara marble for monumental sculpture was very frequent and often softened in color by the use of wax, as very colorful marble sculpture was rare. Meanwhile, fine details such as angel wings, hair and costume ornaments were generally gilded.

The range of sculpture was considerably extended by a major introduction of terracotta, which was a much cheaper substitute for enameled marble and equally durable. For altarpieces, pulpits and fountains, clay was soon employed as also stucco was a cheaper type of material made from sand and marble dust. Wood carving was also common, but only in the wooded regions with a preeminence of wood carvers in southern Germany.

In matters of technical practice, the use of tools and instruments, by Renaissance sculptors was generally carried out following the methods of classical sculptors, although there was a much greater emphasis on pictorial and graphic. Thus, in keeping with the Renaissance philosophy of art, design was seen as paramount. Thus designs on paper were an important feature of the sculpture process. In fact, in preliminary studies, clay, wax or wood models were incorporated and sometimes developed to the point where the actual execution of the work (in bronze or marble) could be done by a skilled craftsman or apprentice. 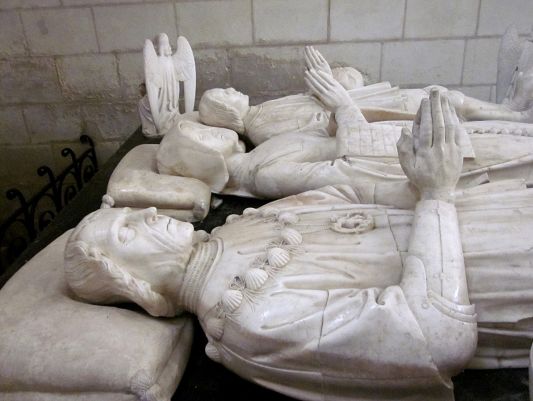 In Rome, the patronage of painting and sculpture was often a papal priority, as in the times of Pope Sixtus IV and Julius II. Therefore, Italian Renaissance painting and sculpture was significantly influenced by a revival of classical forms and themes. Thus, medieval Italy never forgot Greek sculpture or Etruscan and Roman sculpture, during the period 800-1400.  However, this classical inspiration was formally checked by the German influences of Lombard and Frankish. Thus, the return to ancient forms may have begun at the time of the Apulian sculptor, Niccola Pisano (c.1206-1278), and although a number of Gothic traditions survived, they generally took on a progressively more “classical” form. Similarly, another characteristic of early Renaissance sculpture was its naturalism. This is evident by the increase in contemporary subjects, as well as by the shift from a conventional to a more naturalistic and realistic treatment of proportions, anatomical structures, drapery, and perspective. Likewise, the sculptures were energetically Gothic in character. After this came a more classical period and finally a more dramatic period.

The demand for sculpture during the quattrocento (15th century) and cinquecento (16th century) was primarily religious. For the exteriors of churches were adorned with sculptures, not only on the portals, but often the entire exterior facade was covered with statues and reliefs. Likewise, the interior of the churches was filled with altarpiece art, canopies, pulpits, choirs, baptismal fonts and tabernacles, as well as individual statues of saints and angels. Likewise, the doors were cast in bronze and decorated with reliefs, while the choir areas were adorned with figurative carvings. Likewise, the interior walls of Renaissance churches were adorned with funerary tombs and sarcophagi, commemorating archbishops, bishops, generals, politicians and aristocrats.

Sculptural decoration in the form of statues and reliefs were also designed for secular palaces and mansions, while gardens and public squares were decorated with statues, fountains and vases, often created by the most eminent Renaissance sculptors. In addition, the themes for ecclesiastical sculpture of the early Renaissance were taken from the Old or New Testament of the Bible, the most popular theme being the Madonna and Child.

In this sense, in the early Renaissance, the statues in the Cathedrals were relatively inelegant and heavy with draperies of prophets and evangelists that are barely portraits of their own contemporaries. However, in his relief sculpture, the sculptor Donatello demonstrated an improvement in the sculptures, by using the technique of perspective through planes especially in the font for the Baptistery of Siena. Thus, the previous realism was now replaced by a refined classicism, together with a remarkable sense of drama, as contemplated in the bronze statue of David. Then, in a third period, which runs from 1444 to 1466, a further development of the sense of drama was witnessed in sculptures, generally at the cost of exaggerated and unbalanced compositions. Thus, during the second half of the 15th century, the demand for monumental marble and bronze sculptures grew significantly. Likewise, churches received carved altarpieces, pulpits, tombs and statues, while secular palaces were adorned with sculpted doors, friezes, reliefs and portrait busts. 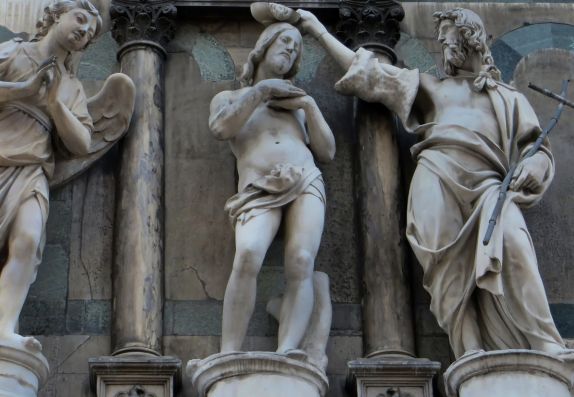 The High Renaissance is a style of art developed in Italy in the late 15th and early 16th centuries, primarily characterized by an emphasis on drawing, schematic, often centralized compositions and the illusion of sculptural volume in painting. Thus, during the High Renaissance in Italy, sculpture was much less dominated by architecture and painting. For example, architecture became more sculptural (pilasters were replaced by columns), while in painting, modeling and perspective overtook outline and composition. Likewise, the taste for sculpture changed. Thus, the intricate decorative bas-relief was largely replaced by high relief and round sculpture. Thus, nobility of design became less important than modeling, posture (of arms and legs) and movement in drapery. Moreover, effect was very important, and although the influence of classical sculpture was maintained, only occasionally did the reproduction of ancient forms occur.

During the High Renaissance the Virgin would frequently appear in the company of the Saints. Stories from the life of Christ, the Virgin, St. Francis and other saints, which were very common in both sculpture and painting, were also sculpted during this period. As the Renaissance developed, some ecclesiastical legends were set against a classical background, such is the case with numerous secular civic sculptures, also, in keeping with classical values, nudity was common.

In the High Renaissance, artists such as Michelangelo stand out, for he was equally famous as an architect, sculptor and painter. His forte, however, was primarily sculpture, with work mostly concerned with the human form. In an early period (about 1488-1496) his sculpture work is comparable to that of Donatello, except that it was freer and more classical. He portrayed the Virgin and child with the same degree of dignity and humanity found in Greek reliefs. He rejoiced in his study of the naked human form in his work, The Battle of the Centaurs. Similarly, in a second period (c.1496-1500) he further demonstrated his focus on the human body. His heavy drapery was set aside, with the poignant piety, in St. Peter’s Cathedral, not to mention the nobility of his David. His style at the end of the period between the years (1500-1564), was exemplified by the Moses (from the tomb of Pope Julius II) and by the figures in the Medici tombs, in which he demonstrated greater harmony in his treatment. Thus, his sculptures modeled, postures, draperies, are of a more finely balanced expressiveness.

A characteristic of the Late Renaissance was the creation of a distinctive secondary movement of this period, Mannerism, distinguished by the deliberate pursuit of novelty and complexity. Thus, in sculpture, the mannerist approach resulted in complex postures and distorted anatomy (e.g., elongated limbs). Many late Renaissance artists worked in a complete mannerist style, those who were not completely influenced by mannerism did so to varying degrees. Thus, the leading late Renaissance Mannerist sculptor was Giambologna, whose masterpiece is the flying mercury. Also famous for his work The Rape of the Sabine Women.

Who are the main representatives of Renaissance Sculpture?

The founder of Renaissance sculpture was Ghiberti, whose masterpiece is the Gates of Paradise, a pair of bronze doors for the Florence Baptistery. The main panels of these doors are ten biblical scenes with impressive realism, including deep perspective.

There are several examples in Florence of Renaissance Sculpture, such is the case of Michelangelo’s David. Similarly, in St. Peter’s Cathedral in Rome there are works by Bernini and Michelangelo, and the gilded bronze papal altar is an example of the beauty and perfection of this sculpture. Likewise, the square in front of the Palazzo Vecchio in Florence is known as the Piazza della Signoria. This place and the surrounding area is filled with many excellent works.  Some of the earliest Renaissance sculptures created by the artists Gilberti, Donatello and Verrocchio master of Leonardo Da Vinci. 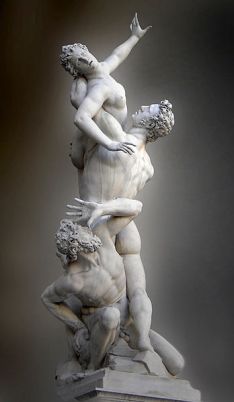 One of Ghiberti’s, Donatello, became the greatest sculptor of the early Renaissance. It was Donatello who had finally restored classical statues (starting with St. Mark), including equestrian statues (with Gattamelata, the first equestrian statue since antiquity), while his major works include St. George and David.

The undisputed Master of High Renaissance sculpture is Michelangelo, who divided his career between Florence (his hometown) and Rome. Thus, the Pietà is the jewel of his early works, while the David, as his masterpiece, is often considered the greatest sculpture of all time. Perhaps, his over all final work may be the Moses. Since, although Michelangelo’s career spanned the late Renaissance, most of his sculpture dates from the High Renaissance and his later years were devoted to painting and architecture.

The pioneering Italian Flemish Mannerist sculptor was Giambologna. As noted above, the typical characteristics of Mannerist sculpture are complex postures and elongated anatomy. The former quality is evident in the sculptures of the violent rapture of the sabines of Heracles and Nessus, as well as the more gentle statue of Mercury. Likewise, the elongated limbs can also be seen in this mercury sculpture, as well as in the female statue entitled the architecture.

Two other followers of Donatello include: Bernardo Ciuffagni (1385-1456), creator of the sculpture of St. Matthew seated in the Florence Cathedral; and Agostino di Duccio (1418-1481) creator of the modal column-statues on the façade of San Bernardino in Perugia and the relief sculptures at San Francesco in Rimini. Like his uncle Luca Della Robbia (1400-1482), Andrea della Robbia (1437-1528) was a very distinguished exponent of terracotta sculpture, noted for his Bambino Tondi.