What is Mime Theater?

Mimic theater although often mistakenly labeled as dance, is a group of theatrical forms in which the performer presents a narrative through stylized gesture, a series of hand positions and mimetic illusions to interpret different characters, actions and scenery.

Greco-Roman mime was a farce that emphasized mimetic action but included songs and spoken dialogue. The preliterary form can only be guessed at, and even the surviving fragments of the plays of Epicharmus, a 5th century-CE comedy writer, give only the scant information that his mimes dealt with scenes from everyday life or mythological parody.

This theater is defined as a technique of non-verbal language, to express an idea, a state of mind or to represent a character entirely by means of gestures and body movements without the use of words. Also called mime artist, a performer specialized in such technique, is usually a comic actor. However, a dramatic performance can also be made using such a technique.

Mime is a silent art form that involves acting or communicating using only movements, gestures and facial expressions, therefore, the person or actor who performs mime is also called a mime.

How did Mime Theater develop?

Mimic theater, began with a form of native Italian mime. The first to give literary form to Roman mime was the knight Decimus Laberius (c. 105-43 BCE), who was eclipsed by the former slave Publilius Syrus. Mime performance was a traditional feature of the annual Floralia festival, which, being licentious in spirit, opened the popular stage to nude mime actresses.

The usual ancient mimic plot, though free to indulge in a determination of scathing language, centered mainly on scenes of adultery and other vices. There is evidence that acts of adultery were performed on the mime stage during the Roman Empire. Likewise, there are records of execution scenes with convicted criminals instead of actors.

The church condemned Roman theater, and early Christian writers mainly attacked mimes as being in a state of degeneracy. The characters and situations of classical mime found their way into the comic drama of Plautus and reappeared much modified in the commedia dell’arte, a Renaissance extempore entertainment with roots in the Roman theatrical tradition.

Many people associate mime with French culture, however, mime is an ancient art that dates back to the early Greeks and Romans. It was in France, however, where mime flourished and became so popular that mime schools were established throughout France, and a great tradition of French mime soon followed.

Literal mime tells a story with a plot and characters, which usually, are stories of funny situations intended to provoke laughter from the audience. However, some modern versions of mime theater also combine these two types into an interesting performance.

A primary characteristic of mime theater is body expression in its maximum exaltation, both of the face and the body, with which the whole language of thoughts, feelings, emotions and actions is communicated to the spectator, making use only of non-verbal language. 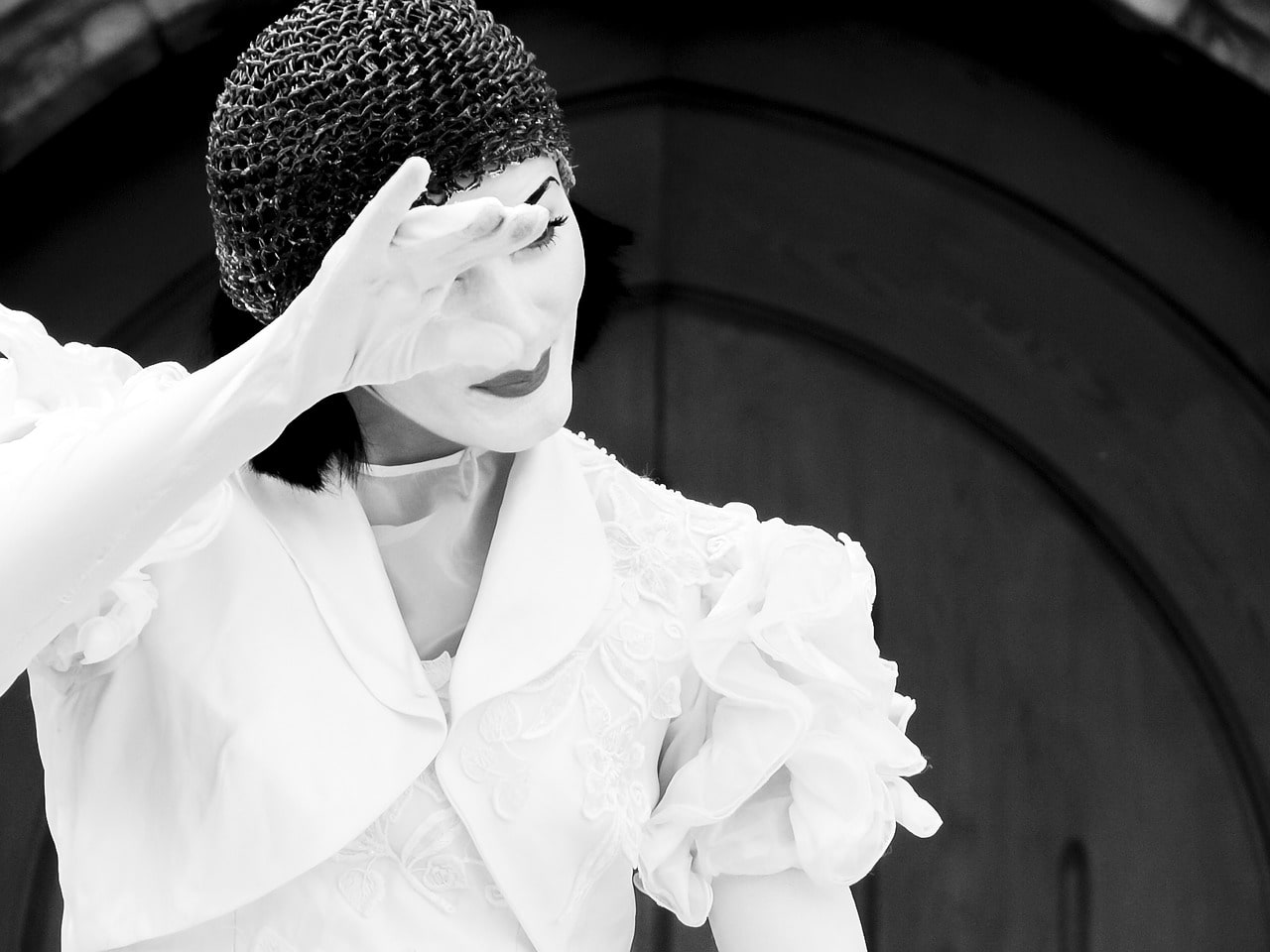 The founding fathers of contemporary mime, Étienne Decroux (1898-1991) and Marcel Marceau (1923-2007), established through their apprentices, a performative legacy with global resonance. As a new generation of practitioners emerges, we seek to elucidate, connect, critique and celebrate the work of the North American mime cohort of the late 20th century, whose legacy exists thanks to these great European mime artists.

To enrich the history of mime, it cultivates their legacy and seeks to imagine the form of these remarkable contemporary artists and their artistry, to exalt the art of mime in future practice, especially as the potentials of motion capture and technological mediation are incorporated.

Marcel Marceau described the art of mime as an art of metamorphosis, which is stronger than words. One cannot say with mime what can best be said with words, therefore, he declared that in order to communicate, a decision had to be made, because mime is an art beyond words.

It is the art of the essential and, according to him, one cannot lie because, with mime one has to show the truth, since, according to this great actor of the mime theater, the public has to understand immediately the mind that one has and in the situation in which the actor finds himself.

Representatives of this theater

Mime was brought to Paris in 1811 by Jean Gaspard Batiste Deburau, who was part of a family of itinerant acrobats. Deburau stayed in France and developed mime into the modern, expressive version that still exists today. Deburau was famous for his silly, naive and lovesick character named Pierrot.

Modern Western mime developed into a purely silent art in which meanings are conveyed solely through gesture, movement and expression. Its influence was strongly felt in ballet, where the formal posture of the classical style was modulated into the descriptive silence of modern dramatic dance movement.

In the United States, silent film mimes like Charlie Chaplin and Ben Turpin, television entertainers like Sid Caesar, and circus clowns like Emmett Kelly were masters in the ancient tradition.

The highest level of modern mime art, however, was reached in France, where its practice was philosophically highlighted by Étienne Decroux, Jean-Louis Barrault and Marcel Marceau. Marceau defined mime as the art of expressing feelings through attitudes and not as a means of expressing words through gestures.

Another representative of mime theater worth mentioning for his mastery of being able to communicate with non-verbal gestural language is Rowan Atkinson and his emblematic character Mr. Bean, who uses both theater and silent film to produce physical comedy. This particular comedy is achieved through exaggeration of facial expression and body language. In the clip Mr. Bean Meets Royalty, this scene is humorous because of the unexpected event of the treatment of the Queen. Through Atkinson’s work, the world is shown that there can be problems faced that seem impossible to solve. But that despite how difficult the problem may seem, by thinking critically and looking at it from a different perspective a solution can be found. 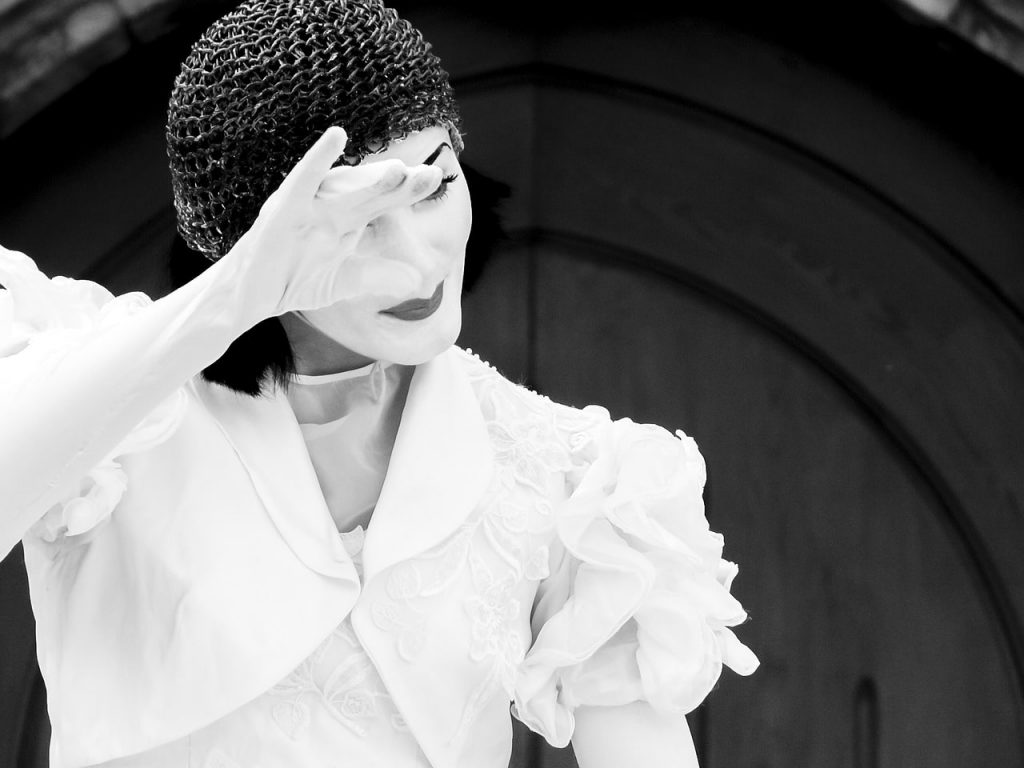