What is Military Architecture?

It is the architecture of the defensive works of walls, forts, watchtowers, whose imposing remains proclaim today the solitude of the Greek landscape, they are the other face, of an architecture that for a long time only wanted to be seen in sacred buildings.

Military architecture as such, can be evidenced in the military constructions, important and numerous in all phases of Greek civilization, are an eloquent testimony of a history dominated by war, due to the political fragmentation favored by geography.

The dry-stone enclosures of Dimini and Sesklo (c. 4000 BC), the fortified tower of Chalandriani of Syros (c. 2500 BC) and the Dorion-Malthi enclosure (c. 1600 BC) are primitive achievements, both in scale and technique, compared to Mycenaean defense works (1400-1200 BC). Although political power was then shared among the feudal principalities, walls were built to protect against external danger.

A continuous wall was built to block the Isthmus of Corinth and sheltering enclosures were built, often quite large (e.g., on the island of Gla in Boeotia 3 km in circumference covering 20 hectares, near the fortified acropolis. Above all, these walls are colossal, requiring considerable work, because they are made of blocks often weighing several tons, roughly square and stacked according to the cyclopean device, are 5 to 7 meters thick and at least 9 to 10 meters high. 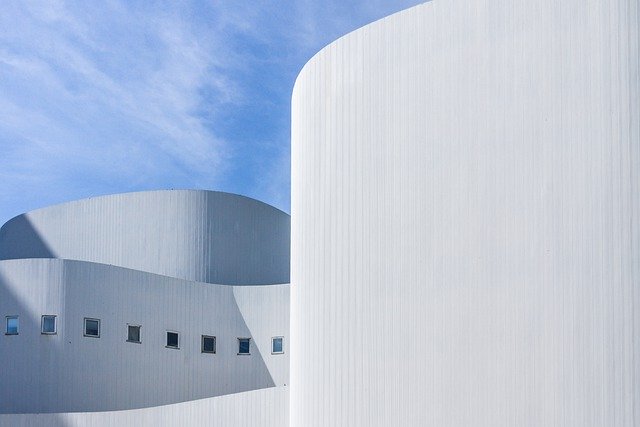 How did Military Architecture develop?

Fortifications arouse admiration through the memory of men and are endowed with supernatural stories to magnify them, such as the famous enclosure that, for King Laomedon, was built by the gods Apollo and Poseidon to make Troy impregnable.

The invention of sun-dried bricks revolutionized the art of fortification, making it possible to create much higher walls, therefore impossible to climb. These techniques were born among the civilizations of the fertile crescent, which required, in addition to progress in the art of construction, a social structure that allowed the requisition of many workers for long periods, which was permitted by the first kingdoms that arose at that time. The object of this new type of fortification also appeared: the first great cities in history.

The objective was to be able to house the reserves and the population of the entire surrounding countryside in a place inaccessible to the enemy, so the defense work was much more important than what was required to protect a simple village.

Thus colossal works of art arise, such as the walls of the city of Nineveh in Assyria, with brick walls almost forty meters high. For the walls of Babylon, Herodotus (5th century BC) reports the use of bitumen mortar and reed chains. When digging the ditches surrounding the city, the earth was turned into bricks that were fired in kilns. Hot bitumen is used as a binder and interlocking reed strings are laid in thirty layers of bricks.

How is this Architecture classified?

During the Renaissance, a new school of fortification emerged and laid the foundations for new forms of fortress defense. It introduced the glacis, a gently sloping area, devoid of any covering, which surrounded the fortress. Another novelty was the covered way, which separated the moat from the glacis and allowed the deployment of musketeers to shoot any assailant who ventured onto the glacis.

It is slightly below the main curtain walls, which are armed by the guns of the square, allowing staggered firing, is not protected from the side of the fortress, and therefore offers no advantage after capture. The use of the earth extracted from the ditch in the construction is again important, the masonry is mainly used to build two walls framing the ditch, the scarp on the curtain side and the counterscarp on the glacier side. The tower disappears in favor of the bastion, between which are interspersed half-moons, replacing the first isolated works.

All these new techniques were formalized in France, in a first fortification treatise published in 1642. It determines the distances between the works according to the range of the arquebus and recommends the staggering of the fires.

They continued their work, in particular by introducing the use of reductions, within the works, to delay their fall, providing the defenders with a fallback position where they could take refuge and benefit from an advantage, within the work itself. The principle of staggering in depth was born and then perfected by his successors.

One of the types of military architecture present in many buildings in different countries is the trench type. A trench is a military construction or building designed for the defense of territories in war, and is also used to solidify the government in a region in peacetime.

From ancient to modern times, defensive fortresses have been necessary for cities to survive in an ever-changing world of invasion and conquest. Some settlements of the Indus Valley civilization were the first small cities to be fortified. In ancient Greece, great stone walls had been built in Mycenaean Greece, such as the ancient site of Mycenae, famous for the massive stone blocks of its Cyclopean walls.

A Greek phrourium was a fortified complex of buildings used as a military garrison, and is the equivalent of the Roman castellum or English fortress. These constructions served mainly as watchtowers, for the control of certain roads, passes and frontiers. Although smaller than a true fortress, they acted as a border guard rather than a true strong point to guard and maintain the frontier.

The art of establishing a military camp or building a fortification has traditionally been called castrametation since the time of the Roman legions. Fortification is usually divided into two parts, permanent and field fortification. Castles are fortifications that are considered distinct from the generic fort or fortress in that they are the residence of a monarch or nobleman and command a specific defensive territory. 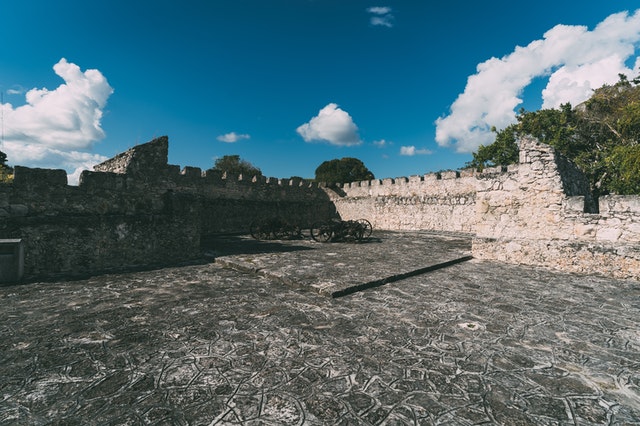 These depictions of military architecture provide a wealth of documentary resources for specific structures, including information on contemporary fortifications built from the eighteenth century.

Fifteenth-century European architects and engineers grappled with the introduction of gunpowder to warfare in the Western Hemisphere. This technological advance forever altered the character of fortification design, rendering the traditional stone fortification of the castle obsolete.

The bastioned fortification system was developed in Italy in the 15th century in response to this new weaponry. The fortification developed by the Italians to solve this problem was striking in its simplicity because they lowered the entire complex to earth, and to prevent an enemy from entering the lowered fort, the old moat was retained and an elaborate system of ditches was developed. Some of the earth from the trench was thrown to the front to create an earthen slope called a glacis.