What is Religious Architecture?

The history of architecture is more concerned with religious buildings than with any other type, because in most past cultures the universal and exalted appeal of religion made the church or temple the most expressive, most permanent, and most influential building in any community.

The typology of religious architecture is complex, because there are no basic requirements such as those characterizing domestic architecture that are common to all religions and because the functions of any religion involve many different types of activity, all of which change with the evolution of cultural patterns.

Religious architecture in cultural heritage has a unique value, since buildings are an asset that gives cultural value to countries and cities, one of the most important material components of cultural heritage. The places of worship remain visible for a long time, for centuries and have been witnesses of inter-territorial historical events and also motivators of later events.

How did Religious Architecture develop?

Temples, churches, mosques and synagogues serve as places of worship and as shelters for images, relics and sacred areas of worship. In older religions, the temple was not always designed for communal use. In ancient Egypt and India it was considered the residence of the deity, and entry into the sanctuary was forbidden or reserved for priests.

In ancient Greece it contained an accessible cult image, but services were held outside the main façade, and in the ancient Near East and in the Mayan and Aztec architecture of ancient Mexico, the temple was erected on top of pyramid-shaped mounds, and only privileged members of the community were allowed access.

One of the first religious architectures was the paleochristian, the artists started from the buildings that were known to them and reformed them according to the principles of the Christian liturgy, taking as a reference the Roman basilica, which was a building with a rectangular plan that had doors on the larger sides and an apse (semicircular structure), while on each smaller side, in the Roman world, spaces were built for social life, commerce and transactions.

Another type of religious architecture is Byzantine, which achieved a vertical dimension by adding the great dome that symbolized divinity and the Kingdom of Heaven. Therefore, there are two points of interest: the point forward, from where the mass was celebrated, and upward, which represented the afterlife. In these temples there was abundant decoration with golden and bright colors that created a luminous and sacred atmosphere complemented with the mosaic ornamentation. 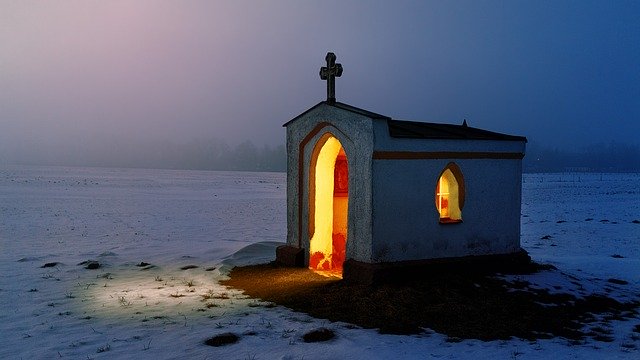 Legacy of this Architecture

Religious architecture as an art has been included in the usual and possible dimensions to speak of man with holiness. Art in religious architecture and religion are naturally intertwined. All the ingenious demonstrate the mysteries that do not appear except with the brilliance of the artist in the creation in religious temples, for having a part of the divine realm, which is the cause of manifesting these artistic works.

Constantine’s church buildings were modeled exactly after the basilica, which was the common government building designed after the Greek pagan temples. They provided a setting for passive and docile crowds to observe an execution, this is one of the reasons Constantine chose the basilica model.

Also, basilicas were designed so that the sun would fall on the preacher as he faced the gathering, just as Greek and Roman temples were, and the façade of Christian basilicas pointed east.

How is this architecture classified?

Sacred or religious architecture encompasses several ancient architectural styles, including Neolithic architecture, ancient Egyptian architecture and Sumerian architecture. Ancient religious buildings, particularly temples, were often regarded as the abode, the temples of the gods, and were used as the site of various types of sacrifice.

Ancient tombs and funerary structures are also examples of architectural structures that reflect the religious beliefs of their various societies. The Karnak Temple at Thebes (Egypt) was built over a period of 1300 years and its numerous temples constitute what may be the largest religious structure ever built.

Proselytizing Christian groups in the U.S., Europe or Africa have built a staggering number of new churches, some of which are quite expensive, and spectacular. In the former Soviet Union, new Russian Orthodox churches have been built and others have been restored or rebuilt, new Hindu temples have also been erected in India in some of the places that have benefited most from economic liberation since the 1980s.

This architecture includes a fundamental element which is the building whose size is generally related to its symbolic and hierarchical importance in the organization of the community. Historically, it developed at the same time as other monumental constructions, and the religious monument responds both to the powerful moral need, as well as being a place of asylum, of refuge, of protection against violence.