What is Le Corbusier’s Domino House?

This content of Le Corbusier’s Domino House was created for you with the purpose of supporting you in your academic formation and in the achievement of your school objectives. It was created with precision in the presentation of the information with answers that make it easier for you to search and systematize it.

The Domino House is an open floor plan structure designed by the well-known architect Le Corbusier in 1914-1915. It is a design idea for mass production, combining the order discovered by Le Corbusier in classical architecture.

The Domino system was created in 1914, as a conception of a building system that contemplates the problems of post-war reconstruction. Later, in 1929, at the time of the Loucheur Law, the principles of the Domino system were applied. Thus, this Loucheur law establishes that the houses would be made avoiding that they were industrial artifacts, responding precisely to the functional needs of modern man. Thus, the Loucheur houses refer to a fusion of artisanal and industrial methods of housing concept, which managed to produce a variety of prototypes of these houses in series with the constructive techniques of the place, taking into account the operational capacity of local builders. 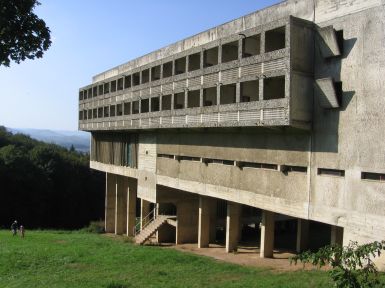 This model proposes an open floor plan consisting of concrete slabs supported by a minimum number of reinforced concrete columns around the edges, with an access staircase to each level on one side of the floor plan. The structure was to be totally independent of the floor plans of the houses giving freedom for the design of the interior configuration. The model eliminated load-bearing walls and support beams for the roof.

Moreover, after the first widespread devastation of the war which would have been in Flanders in September 1914, the destroyed villages had to be rebuilt within a few months. Therefore, a structural system was conceived, with a frame completely independent of the house plans.  This frame carries the floors and stairs, which, when fabricated outside of the standardized elements of one another, allows for the mass construction of a variety of grouped houses. Similarly, the reinforced concrete was formworkless i.e., a special regime established on site that allowed the slabs to be poured with the floor completely smooth and level by means of a simple scaffolding of double T-beams temporarily attached to collars fixed to the top of each column. Aligning the reinforced concrete columns poured at the start of the work, with the above scaffolding system.

In this regard, the contractor delivered the marked and grouped frames in the order, to the architect planner. Likewise, the other contractor matched the additional elements, which could be mass-produced, such as windows, doors, frames and others. Thus, the result of this completely new method of construction connected the window system to the structural frame, and then, the doors were fixed with their frames aligned with the wall panels for the form partitions. Then beginning the construction of the exterior walls. 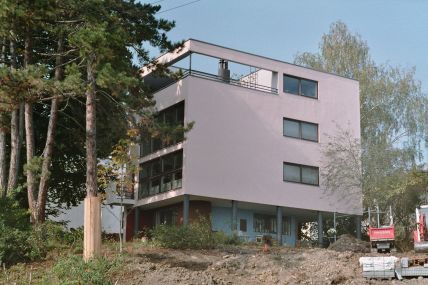 For Le Corbusier’s Domino House This system is a prototype as the physical platform for mass-produced housing. The name is a play on words that combines an allusion to domus (Latin for house) and the pieces of the domino game, because the floor plan resembles the game and because the units can be aligned in a series like dominoes, making rows of houses of various patterns. Hence, this design became the foundation for much of Le Corbusier’s architecture of the coming years.

The Domino building system has its origin in the words “domus” and “innovation” spliced together. The idea was to make a skeletal housing structure, so that the inhabitants could decide for themselves where the walls should go and what their homes would look like on the inside. Being familiar with this idea today, one can build open plan offices and apartments of a brighter type.

Some architects also dabbled with reinforced concrete, but it was Le Corbusier who created a technology of steel beams in concrete slabs. This scheme allows what he called the free plan, where walls can be placed anywhere. It also allows a new aesthetic possibility, because the walls do not reach the ceilings, they form the rooms, making a more fluid space.

In other countries such as Italy, architects such as Grima and collaborators used the Domino structure. Thus the Domino system of construction has been widely used in several countries, as it is a very versatile and easy to use construction system for builders and planners, since it was designed by Le Corbusier as a prototype of housing that addresses all of Europe due to the housing shortage in the post-war years. The system itself never saw widespread production, either by the architect or his European contemporaries, in the form it was initially conceived. Instead, the unbuilt images and design principles became widespread, making it the most recognizable, most fundamental architectural project of the twentieth century. Likewise, the Domino project determines in modern architecture a set of guiding, abstract and idealized principles. This is a key reason why this system can still be seen and felt a hundred years later.