What is Bauhaus School?

This content of The Bauhaus School was created for you in order to support you in your academic training and in achieving your school objectives. It was carried out taking into account the precision in the presentation of the information with answers that facilitate the search and systematization of it.

Staatliches Bauhaus, commonly known simply as Bauhaus, was an operational German art school that operated from 1919 to 1933 and combines craftsmanship and fine arts, being famous for the approach to design it published and taught.

Definition of the Bauhaus School

The Bauhaus was founded by Walter Gropius in Weimar. So, the German term Bauhaus literally means “building house”. This school was understood to be a “School of Construction”, however, despite its name and the fact that its founder was an architect, the Bauhaus did not have an architecture department during its first years of existence. However, it was founded with the idea of creating works of total art, which included all the arts, including architecture, which would eventually be brought together. Therefore, the Bauhaus style later became one of the most influential currents of modern design, modernist architecture, art, design and teaching of architecture. Thus, the Bauhaus School had a profound influence on the later developments of art, architecture, graphic design, interior design, industrial design and typography.

The school existed in three German cities, Weimar from 1919 to 1925, Dessau from 1925 to 1932 and Berlin from 1932 to 1933, under three different directors and architects, Walter Gropius from 1919 to 1928, Hannes Meyer from 1928 to 1930 and Ludwig Mies van der Rohe from 1930 to 1933, when the school was closed by its own leaders under pressure from the Nazi regime , having been listed as the center of communist intellectualism. Although the school was closed, staff never separated from their idealistic precepts, emigrating from Germany and leaving for various parts of the world.

Changes in venue and leadership resulted in a constant shift in focus, technician, instructors, and School policy. For example, the pottery store was suspended when the school moved from Weimar to Dessau, although it had been an important source of income. Similarly, when Mies Van der Rohe took over the school in 1930, he transformed it into a private school and would not allow any of Hannes Meyer’s supporters to attend it.

The most important influence of the Bauhaus School was modernism, a cultural movement whose origins were established in the 1880s, and which had already made its presence in Germany before the world war, despite the prevailing conservatism. Likewise, innovations in design were commonly associated with Gropius and bauhaus, as well as radically simplified forms, rationality, functionality and the idea that mass production was reconciled with the individual artistic spirit, which were already partly being developed in Germany before the Bauhaus School was founded.

The school was founded by Walter Gropius in Weimar in 1919 as a fusion of the Great Ducal School of Arts and Crafts and the Weimar Academy of Fine Arts. Its roots are in the School of Arts and Crafts, founded by the Duke of Saxe-Weimar-Eisenach in 1906 and directed by the Belgian art nouveau architect Henry van de Velde. Thus, when van de Velde was forced to resign in 1915 because he was Belgian, he suggested Gropius, Hermann Obrist and Endell as possible successors. Gropius became the director of the new integration institution of the two previous schools called the Bauhaus.

Germany’s defeat in World War I, the fall of the German monarchy and the abolition of censorship under the new and liberal Weimar Republic allowed for an increase in radical experimentation in all arts, which had been suppressed by the old regime. Many left-wing Germans were influenced by the cultural experimentation that followed the Russian revolution, such as constructivism. Such influence was considered exaggerated, so Gropius does not share these radical views, stating that the Bauhaus School was totally apolitical. Likewise, the Bauhaus style, was also known as an international style, since, it was marked by the absence of ornamentation and by the harmony between the function of an object, a building and its design.

One of the most important classes at the Bauhaus was typography. In fact, several teachers soon realized the essential role of effective visual communication types. The Bauhaus concentrated on simplified sources and avoids much heavier representations of the German standard typography of the time. Thus, designers began wrapping text around objects and also learned to organize it horizontally, vertically and diagonally even, which was not common at the time. They also refused to combine the upper and lower box types into one work and preferred the use of “serif-free” fonts (sans-serif). The innovations introduced by the Bauhaus are still very effective today. Thus, an example of this trend is the Barack Obama poster, during his election campaign in 2008, who visited Berlin and his speech in the city was announced with this poster very similar to those of the German school. In fact you can see that it is characterized by diagonal words and a capital letter without serifs. Likewise, there are no useless decorations in the design and simple lines predominate.

The Bauhaus also demonstrated a deep interest in simple geometry, another quality that makes it of great fit for current design on the network. The students were very well trained, taking the ideas of the paintings of contemporary artists, in this case cubists like Picasso and Grey, then adopting similar ways of seeing and perceiving reality. For geometrically trended designs, they began by breaking objects with these shapes, considering this technique as the best way to create new and more modern items.

In this sense, clean, abstract and geometric shapes were constantly used to produce new, more common shapes that could highlight the difference between old Art Nouveau trends. An example of his design was that in 1925, Marcel Breuer, a member of the Bauhaus school, designed a new chair model, which was later called the “Wassily Chair”. This chair consists of metal tubes and leather bands that give an idea of fluidity and flexibility, being the designer capable of making a minimal and fluid design that lasted for years and that is still preferred and requested today.

Identity (ID) design,on the modern website remains par excellence bauhaus style. Since this current design is a site with the minimum and simple to highlight the user experience in the project. The header shows only two letters, “ID”, then there is a transparent menu bar that leads inside the content. In addition, following Bauhaus trends, the “Identity” design does not use serifs or overly complex typography. 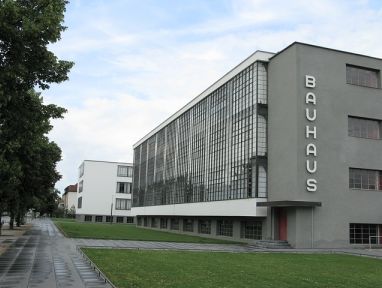 Main works of this school

The Bauhaus School made with its architects, typographers, designers and artists a series of works of art, of which the most important ones are presented below. These works summarize the main ideas of the movement and highlight the greatest achievements of each Bauhaus artist.

The Residential Complex of Dessau, Germany (1919-1925), by artist Walter Gropius

Gropius was Director of the Bauhaus School in Dessau and came to be seen as a reference point in modern functionalist design. Although the design of this residential complex, seems strongly unified from above, each element is clearly divided from the next, and on the ground a wonderful succession of changing perspectives unfolds. The building consists of an asphalt tile roof, steel frame and reinforced concrete bricks to reduce noise and protect against time. In addition, a glass curtain wall, is a feature that would become typical of modernist architecture as it allows wide amounts of light. Gropius created three wings that were arranged asymmetrically to connect different workshops and dormitories within the school. Asymmetry expressed the functionalist approach of the school and still retains an elegance that demonstrates how beauty and practicality can be combined.

The elegant design and innovative use of materials in “The Wassily Chair” are typical of innovative developments in Bauhaus design. This design is lightweight, easily movable, and its components are fixed with a clarity that makes its structure immediately readable. The new Breuer materials, made of seamless steel bent pipe that could withstand physical stress without difficulty, were also used.

Bayer was an Austrian artist and designer who originally entered the Bauhaus as a student and later took a teaching position at the school that moved to Dessau. Many German designers tried to encourage changes in national customs printing in the 1920s. Until now, the most popular German typography had been influenced by medieval writing, but artists like Bayer tried to supplant with simpler, more classic designs. This design employs minimal, serif-free typography. Instead of having two alphabets, one uppercase and one lowercase, Bayer reduces the font to only lowercase letters.