What is the Informalism?

Out feature of the art Informalism is that it follows the principles of non-geometric abstraction, but keeping the materiality of painting and its multiple techniques, away from the non-figurative and figurative form, emphasizing the color as its subject and subject in the works. So it is an artistic trend specifically painting, close to abstraction, but aside from the line and the definite form.

As art movement originated in Europe finalizing the forties, and abstract materials is its fundamental principle. Therefore, is attributed to the French critic Michel Tapié, the concept of informal art, considered a different art. Also, informalism in art is regarded as complex because that integrates other trends such as the gestural material, the tachisme and specialist. Thus the informalism differs from other pictorial streams by the strong presence of the personality of the artist through the techniques and materials used, highlighting the chance and improvisation, without a deliberate construction but with an ideological base strongly linked to Existentialism, that was the reaction of the product of the second world war artists.

What stands out the most are the trends that are reflected in the collages of the Cubists, chance and the chance of the dadaists, but at the same time the attraction to different types of materials, is also reflected as it can be seen in the works of Dubuffet. Shaping a kind of eclecticism in the works because different currents trends are taken both in color and materials, with expressionist touches, giving importance to the psychic automatism of the Surrealists.  What most determines this art, so it is the sign, the matter, being an art that emerges from the darkness of the post-war period. So the expression which is evident in the paintings is at the basis of dripped oil, large fillings and breaks, as well as the use of other materials like wire, burlap and sand.

On the other hand, in Spain, this art of informalism takes much boom in the 1950s with a generation of artists that in their forms of expression are discussed between European informalism and American abstract expressionism. Among them are painters such as: Tàpies, Guinovart, Puig, Saura, thousands and Canogar, among others.
In this sense, the informalism in Spain, has two aspects of Barcelona and Madrid, with the raised bottom of the existential crisis of the post-war period. In Barcelona, is the Group of Dau al Set in 1948, very strongly rooted to surrealism, which then influence in the 1950s to the informalist, such is the case of Lourdes Cirlot, establishing four trends of the catalan informalism, applied to the mater, painting signo-gesto, the tachista and the specialist. We must remember that after the war the cities and population was devastated and aimlessly, this is strongly reflected in the art especially in painting, and it is a kind of healing for the mind and soul of the artists , by what are summarized a number of features as they were:

How was the informalism developed?

Informalism is based on the Existentialism of postwar Europe, artists on multiple occasions not even use the brush but what they do is to scratch the thick surface, material, previously created with the new materials. Also, use the spatula to make spontaneous and disorderly lines denoting chaos, also making scratches, burns and grattage on canvases.  Therefore, what most characterizes this art is the large number of different materials and techniques that might be that they were taken on an occasion of Surrealism (operator), in others of Dadaism (detrital materials, collage), but which in others could be product of the investigation (dripping, grattage). Thus, also within the informalism was used the tachisme, gestural painting, informalism materialistic, in short, a positioning so heterogeneous that it has come to qualify, just as other art. Is therefore required before moving forward with approaches clarify some concepts such as:
The striking Art: named to the technique of the studs that account for amorphous surfaces without structure. Scratch that also come to form part and which are given as response to a spontaneous, intuitive action, informal product of vital or creative impulse of the artist, such is the case of the works of Hartung which has a lyrical approach,  achieved with the application on the grattage, but always in an intuitive manner, so that, with these tools the artist achieves a very dynamic pace in the compositions. Then there is the gestural painting, showing in the execution of violence and expressiveness of the brush strokes the mood and personality of the artist, for which are qualified with that name.

Similarly, it is important to differentiate the technique of the paint material that is another the informalism of 1950s trend. Taking own matter, manipulated, transformed, are added to the pigments as an expressive medium, emphasizing how alien to these pigments materials. Thus, it is in the works of Alberto Burri where this technique is evident because it performs compositions by way of collage, where combines painting with metal sheets, Burlap, fabrics burned, plywood, plastic, some of them with a dramatic value going to extremes.

Similarly, it is important to differentiate the technique of the materica paint  that is another  informalism style of 1950s trend. Taking as own expressive way its own matter, manipulated, transformed, are adding pigments as an expressive form, emphasizing these materials as foreigns of pigments. Thus, it is in the works of Alberto Burri where this technique is evident because it performs compositions by way of collage, where combines painting with metal sheets, Burlap, burned fabrics, plywood, plastic, some of them with a dramatic value going to extremes.

What is the legacy of informalism?

The most important legacy of the informalists is the richness in the use of multiple techniques of various trends, also the use of multiple materials, both integrated in the works of eclectic way. Which reflects the existential conflict of these artists. Demonstrating the disenchantment with collective utopias or positive Sciences, betting on the unique, last-minute appeal, as it was subjective, irrational, and immediate position in a truth that is not negotiable and as a form of relationship with himself and with the environment of postwar, in which are interested in everything from the most humble and so far negligible, making is to emerge from the depths. Therefore, if there is a legacy that can highlight informalism apart from the diversity of techniques and materials used in eclectic way are the currents that are subsequently consolidated from the way how it was built. They are: the gestural informalism, which derives more than everything in the way of painting. Informalism material, due to the textures, holes and other details. The absence of shape or perspective. Gross called art, which some regarded it as a movement apart. In design is in sight the appreciation of the beautiful, as it is looking for a move away from the beautiful, making a rustic, coarse, tracing where the materials are mixed with paint and resorts to the inner world of the artist, the mental paranoia and madness. It is also, the spatialism, technique that uses holes and open spaces in fabric, in order to connect the fabric to the real space.

However all these currents are unified in common characteristics, they are: the removal of abstraction in painting, as is rather an amorphous abstraction, since it uses less geometric shapes such as squares triangles in these informal works, nor shown a willingness to structure elements. So, while a few small sketches  were made, thought not previously which would make to balance the composition, while everything was improvised, randomly.

Now, in relation to the design, the artist was making his work and if there was it reloading or it saturated, it gave same, same thing if something unexpected happened. By what was improvising while he was creating.

To go in search of the gestural and the textured, priority is given to the authenticity of the painting, and is going to the pure fact of painting, which shows the gesture of the artist, calligraphy, forms, stain and textures, which were achieved if it was necessary to sticking a piece of dirty cloth leaky fabric. This was also achieved by the introduction of other techniques such as the frottage (rubbing rough surfaces against the canvas), collage, grattage (scraping the dried paint with a tool), runs, drips, holes or cuts and what they did lack to achieve the texture and sought contrasts. 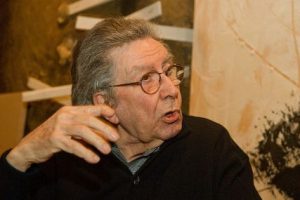 What are the representatives of Informalism?

When you inquire about the informalism and its highest representatives appears Antoni Tapies, a Spanish, in the year 1923, painter, sculptor and art theoretician Spanish because it apparently is one of the main exponents of informalism worldwide. This artist is catalan and has a Center for study and conservation in the form of a foundation that bears his name in Barcelona.

He is considered a self-taught, he created his own style within this twentieth-century avant-garde art. Similarly, the made a combination of tradition and innovation, with a style abstract but very symbolic, prioritizing the material substrate of the work in the dark clear. Likewise, this artist lies within the matter informalism, since uses mix of traditional pigments with materials such as clothing, sand, straw, among others, with the technique of collage and Assembly, with a texture that is close to the low relief, making black rectangles. So his technique is considered mixed because it paints on canvas, in media, in horizontal position formats, providing a homogeneous layer of paint and above this layer makes a mixture of powder of marble crushed, bringing together pigment and oil, using the spatula or with your hands.

Another the informalism teacher was Jean Fautrier (1898-1964), as he is considered a pioneer of the trend informal, that it believes was the artist who started at the end of the Decade of the 1920s this stream. Because although his works were figurative and connected with Expressionism, they had very individual characteristics in texture that highlight and give authorship to the informalism.

Therefore, his works even though they try to character biomorphic figures, consist of irregular oval shapes that stand out on funds due to the different treatment given to the matter of which are built.  Thus, in general, the works of Fautrier differs by the great capacity of the artist to combine elements that seem irreconcilable. Since his works is Instrumento the sharp of his language without affecting subtlety.