Graffiti, was at first considered as an act of vandalism, tagging, scribbling and so many other terms, often pejorative, associated in the collective imagination with this particular way now considered an art, because graffiti is a practice that used to be widespread, and took many forms.

Graffiti has its origins in antiquity and the term comes from the Latin word graphium, which refers to a pencil used in Rome to inscribe and write, particularly on wax. It is also associated with the Greek verb graphein, which means to write but also to draw.

The origin of graffiti is determined in works scattered on the walls of Pompeii, covers the agora of Smyrna, or marks the stages of the journeys of scribes along the Nile. It often specifies the key moments of history and is both a source of testimonies and a kind of open book to tell the stories of those who have preceded in time.

Behind these definitions, however, and especially in the long history of graffiti since antiquity, the boundaries are not so strict. Firstly, because not all graffiti are known. Secondly, because some wall markings are still difficult to classify. For example, the round, hollow marks on the facades of churches and the drawings made in blood on the walls of the dungeons of the Château de Vincennes have yet to be defined.

In the 20th century, however, graffibti became an esteemed aesthetic art not only in the art world, but also among amateurs looking to acquire some of these very special works.

Graffiti is now part of the various art forms in its own right and for a long time considered an act of vandalism, some followers have managed to turn it into a respectable art form.

One thinks in particular of chrome and bubble styles, as well as drawing inspiration in the form of comics or by tattoo art, airbrush painting graffiti.

A multitude of graffiti artists became interested in painting on canvas, and some of them even went so far as to exhibit in the art galleries that dotted the very particular universe of the New York art scene.

Some artists developed very particular methods to achieve their works, which made them highly respected virtuosos all over the world. Among others, Jean-Michel Basquiat (1960-1988) or, later, Banksy (1974).

In the case of Banksy, for example, he uses stencils cut with great precision and painted with all possible supports, aerosol, brush and roller paint, among others.

What characterizes graffiti is the result of a movement, a gesture made by an artist. Graffiti often keeps the movement that created it in its form, it is a spontaneous action, which does not follow a previous drawing and is often done impulsively, unlike a work done by an artist who has previously planned. Likewise, we speak of the trace left by graffiti, because it shows what remains of this gesture, with respect to the moment of its creation.

Not all marks on the walls are graffiti, because graffiti is not always considered as such, but it is often a reminder of the stonemason who did the work, and it is often encoded on the stones of the monuments. In fact, they were given a very clear practical function, that of identifying the creator and thus being able to pay him according to the work done, these are known as lapidary signs. 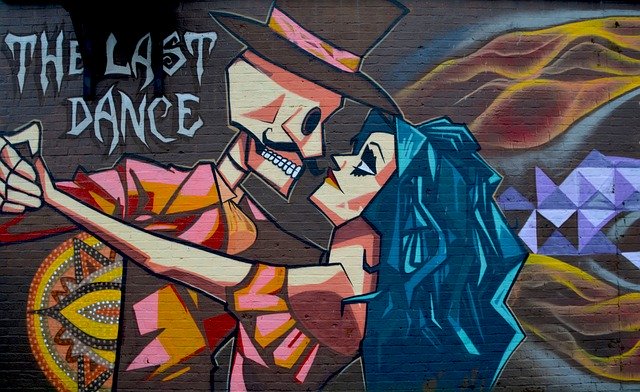 Legacy of this type of painting

In recent decades, a multitude of talented graffiti artists have made a name for themselves through their work. Among them, Cornbread, Jean-Michel Basquiat, Blek le Rat and Banksy. The latter have often caused a lot of ink to flow, but they have become icons of street art through their irreverent and clever creations, which often reflect what everyone is secretly thinking.

In New York, a new regulation was adopted specifically designed to counteract graffiti. Thus, the deterrent effect became palpable and discouragement was at an all-time high. A small number of graffiti artists persisted in painting trains and subways, despite costly fines and even prison sentences in some cases.

In the 1990s, even more emphasis was placed on penalties and graffiti enforcement. Despite this, enthusiasts never completely abandoned their art and continued to paint.

Today, many countries consider certain works to be contemporary art and tolerate graffiti with a touch of pleasure and admiration for these artists who play a key role in freedom of expression.

Although graffiti art took off in the 1900s and more specifically around 1942, during World War II. It is at this time that graffiti is really valued. One of its representatives is Kilroy. He is a man who is believed to have worked in an industry that made bombs in Detroit, Michigan.

In the 1950s and 1960s, it was Cornbread’s turn to make a name for himself with his graffiti. He was working with his partner Kool Earl. The latter helped him make graffiti what it is today. Cornbread had started doing graffiti to impress a young girl but, to his surprise, he gained in popularity, as a result of which, the media became interested in his work, which often received wide publicity.

In the late 60’s there were many demonstrations of all kinds, due to the Vietnam War which resulted in many lawsuits, and the peace sign was painted on a multitude of college campus and school walls throughout America and Europe.