What is Tempera Paint?

A traditional tempera is a dense, pasty paint made with water, animal glue or vegetable gum, a chalk filler for opacity and pigments. Therefore, tempera is not egg paint, nor is gouache whitewash.

Tempera is a term for paint that is said to be a color diluted with water and gum before Jean de Bruges found the secret of oil paint, painters only worked with tempera, gouache was painted on plaster walls, on wood, on skins, on canvas, on thick paper as long as the base is not greasy and is not a fresh layer of gesso with lime. This paint lasts a long time when covered and in a dry place.

Gouache has long been the dominant paint in European interiors. Until the advent of vinyl and acrylic resins, craftsmen painted the ceilings and walls of houses with gouache, commonly called by the name of a glue, Totin glue gouache. They also called it “gelatinous white”.

I know many artisan painters who painted in the 1960s with gouache. They quickly abandoned water-based gouache for walls, reserving the use of gouache for cabinet interiors and ceilings, to paint with synthetic resins, as the ease of application and drying of these new molecules made their work much easier. Gradually, the use of tempera became anecdotal.

In fact, its use was diverted towards furniture to be rehabilitated. However, in many European countries, people continued to paint interiors with tempera (Sweden, Norway, Eastern Europe, certain regions of Italy…) until it became anecdotal. It is used again today because tempera is a completely natural paint.

Tempera has a matte and dusty, rustic, lime-like appearance and is applied with a large brush and the tool leaves traces of string. It is a brushed paint and not smoothed. 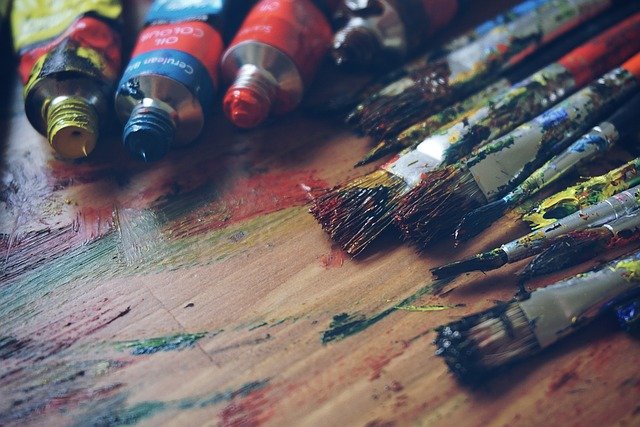 Tempera paint has many components and the coloring agent is pigment, a solid particle that determines the color, opacity and consistency of the paint.

The pigment floats on a binder (oil, wax, sap, egg or water). Painters always use the same pigments and modify only the binder to create different types of paints, from tempera to acrylic to watercolor.

Legacy of this paint

Although tempera painting has been around since ancient times, in Pompeii, for example, Renaissance artists developed new forms of tempera, which was a paint composed of crushed pigments and a water-soluble substance such as egg yolk or casein (milk protein).

Tempera painting was eclipsed by oil painting during the High Renaissance; oil was more suitable for the kind of effects Leonard and his contemporaries wanted to achieve.

Some artists, such as the Mexican Diego Rivera, used it again in the early 20th century, but it was mainly between 1930 and 1950 that tempera achieved a real revival.  The most important representatives of this technique are N. C. Wyeth, his son Andrew Wyeth, Thomas Hart Benton, Paul Cadmus and Jackson Pollock, who were all artists who experimented with tempera on canvas, inspired by painters of the Middle Ages and the Renaissance.