What is the Figurative Surrealism?

This Surrealism movement had among its principles the concept of naturalistic figuration which considered that it could be an equally valid resource than other flows. Its artists representatives were interested in dreams and magical realism. So to understand the significance of this art, it is required to contemplate the works of Salvador Dalí, René Magritte, Paul Delvaux, Estefano Viu or Yves Tanguy, who went more by the oniric way dream like, a figurative surrealism which works shows a  photographic realism, totally away from traditional painting.

This trend originated in Europe, in the Gallic country, after the first world war. Thus, from the figurative surrealism especially in the art of painting artists resort to the principle of visual perception to awaken different sensations in the viewer.

However, it is considered that no one as Salvador Dali systematically explored different possibilities of representation in images of the real and unreal, outer or inner world, so masterfully by resorting to a huge arsenal of techniques with optical principles. Being strongly influenced by his great craving for experience and handle a pictorial technique of high quality and expertise, his works stand out for the hyper-real images, masterfully using the perspective.

Thus to be very attached to the surrealist movement he used his knowledge of visual perception in order to translate into images his inner reality, that of the unconscious, of dreams, impossible, or imaginary worlds based on obsessions, desires or perceptions delirious, giving  in his paintings total appearance of reality. Similarly, his constant interest in science and his eagerness to conquer the three-dimensionality in their artistic creations led him to experiment with holography and stereoscopy. 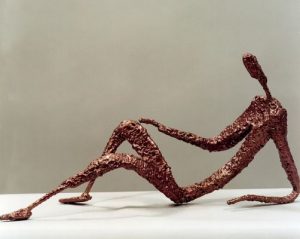 How was the figurative surrealism developed?

Given that surrealism is a current of thought which influenced not only the arts, it also made it into the field of Psychology which gave large contributions to the understanding of figurative surrealism. So, at the beginning of the 20th century originated in Germany the Gestalt psychological movement that raises the interpretation of forms received as a whole and which art benefited in a notorious way.  Some laws and principles in this field, were used repeatedly by Salvador Dali.  An example of these principles is the tendency to group together in a single entity the elements that seem similar, also, when for example, we see an incomplete figure, our brain tends to complete it, in the same way, the brain recognizes a figure on a background, however, this figure and background can merge as background and figure respectively, and so on (see figures).

Therefore, a fundamental part of visual perception used in figurative surrealism, is the perception of the space, the physical space in which we are located, both of space represented on a plane. So, a series of keys are presented to facilitate the perception of physical space: the binocular parallelism, which brings the deep appreciation to merge slightly different images projected by both eyes in a single image that is the stereoscopy and holography. These are techniques are taken in advantage by this binocular parallelism to create three-dimensional images. Another key is also the convergence, which allows information on the distance to an object from the angle forming visuals shafts of both eyes to look at it. Likewise, is another key is when with automatically and monocular accommodation, the brain relates the near-far with the contraccion-distension of the ciliary muscle of the eye.

What is the legacy of figurative surrealism?

One of the most common themes was the eye, in the sense of the visual perception, which is a window open to the imagination and thanks to which you can elucidate a fantasy world, beyond worldly appearances. Therefore, artists did portraits and self-portraits with eyes open of afraid and hallucinated people, representing a mental image search, ergo see the eyes of Salvador Dalí, with bulging eyes he showed that he lived surrealism. This was part of their configuration as a human being and genius. Similarly, the personality of Dalí and his work were greatly influenced not only by the figurative surrealism, but also from family events.
On the one hand, his paternal grandfather suffered from paranoia and end up committing suicide, giving rise to a kind of familial inheritance of anguish before the madness. Thus, the paranoia is a skill through which the brain perceives connections between objects or areas that apparently are not linked together in a rational manner. Dali said that since he was a child he had developed a capacity to see an object and transform it into what he wanted. Then, although for Freud was a mental pathology for Dali was a way to access  the understanding and creation.

What are their main representatives?

As already has been proposing from the beginning of figurative surrealism, it is Salvador Dalí who mostly configures this art movement and thought. Thus, the great contribution of Dalí to figurative surrealism was the paranoiac-critical method. Giving criticism to the paranoia is the separation necessary and sufficient to define and discriminate. Therefore, paranoia taken to an extreme produces an indefinite confusion, and this can end leads to abstract art, which somehow Dalí hated. Dali then defines a method of irrational knowledge based on the critical and systematic objectivity of the associations and interpretations of delirious phenomena. With this method, Dali aims to show a perceptive alternative with the help of paranoid obsessions, overcoming ingrained cultural and cognitive structures that make seeing reality from a rigid and absolute point of view. Dali made his painting an illustration aware of their delusions. Thus the work of Dalí is littered with symbolic, delusional, hopeless, hypnagogic, dreamlike images, anamorphic and pareidolics. Similarly, his works are intended as an extension of its psychological complexity, and of his life, which is a very relevant and distinctive characteristic of surrealism.

On the other hand, Salvador Dali, combines a variety of very significant elements that express an unimaginable amount of different readings (symbolic images) in his works. In them are reflected numerous symbols such as the drawers (what for Freud means that the human body is filled with secret drawers which only psychoanalysis can open them), also from nature, insects such as ants (which represent repression) or grasshoppers, animal that Dalí always felt pathological phobia and shock, to the end that in the mouth of one of his characters pose a threat to sexual integrity.