What is Abstract Expressionism?

This derivative of the abstract surrealist stream has a main characteristic the expression of the emotions, and the psychology of the artist, through color, completely denying the figuration.

This artistic and literary movement of European origin emerged at the beginning of the 20th century, has like fundamental principles surrealism, but the intensity of the expression of feelings and sensations, is expressed in much of the literature works and painting, sculpture, among others. Thus, from painting, this expressionist movement was developed in the United States of America in the middle of the 20th century, showing the emotions and feelings of the artist through the abstract technique of color and its manifestations. 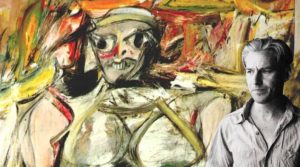 How was Abstract Expressionism developed?

Given the persecution that arose after World War II and the Holocaust, led to a period of uncertainty and stupor that caused this in the artistic-historical episode, United States, and especially New York, welcomed persecuted artists and thus dominated the artistic panorama, importing the experimental creativity of European totalitarian States with the establishment of many of these artists from the continent, such as: Mondrian, Ernst, Chagall among others.

From there, took place the forms of creation torn and full of contradictions that seemed to put aside all the aesthetic. Thus for Kermode are apocalyptic variations and must deal with the problem of the empty product and a lack of reference images after banishing old heroes and stories that undermine previous vanguards transformers purposes to the war.

On the other hand, until abstract expressionism, show up in United States, it reinforced the belief of an art linked to the contemporary life of the year 1945 on the emergence of the federal art project, with the presence of the Mexican muralists developing works of large-format and the surrealists who sought in the subconscious and the abandonment of European traditions, their inspiration. So the  new art  would also issue individual freedom.  Therefore, this new movement represented a triumph in the emergence of American painting, which meant the cultural brand of the country in the cold war. However, this expressionist movement reaffirms the individual and expression through art. So it brings personal searches around the stroke, stain and matter. Clamping the materiality of the picture as surface, breaking up from illusionism from the perspective and representation of another reality that was not the own stroke and matter. It is based therefore on the credibility of the painter as an individual who is expressed through the picture plane, the gesture and physical action.

What is the legacy of Abstract Expressionism?

Abstract expressionism underwent a transformation as the exiled artists reaffirmed their cultural identity, due to demand of adoptive countries. These refugee artists and gallery owners were confronted with a reasonably understanding in the public matter. Therefore the international modern art was quickly institutionalized in New York. Then New York abstract expressionism, established once claimed in Germany the term ownership and movement. Thus the interpretation of abstract expressionism has been considered as a search for cultural and national identity, since it was strongly influenced by the policy during the cold war and the division of Germany into Western and Eastern reinforced by the construction of the Berlin wall in 1961. Which led to a period of historical repression, equating the artistic confrontation with a fragmented cultural heritage in 1980, which censured the Expressionism, the restoration of his legacy to be a challenge that reinstated the artistic authenticity as a key feature in the creative process.

On the other hand in abstract expressionism is revealed existing ambivalence between idealistic ambitions and the reality of their business practices, because in the context of capitalism more recent conflicts are emphasized as it gets a authentic artistic positioning, which became increasingly less viable to this current. However, its ability to cause this confrontation between painting and criticism bears witness to its constant presence in the culture of the 20th century.  Therefore, his most important legacy is the search for a reality itself and essential, in the midst of separation suffered by European artists to be exiled from their home countries and the cultural, psychological and emotional integration that had to do for establish themselves in a new culture. 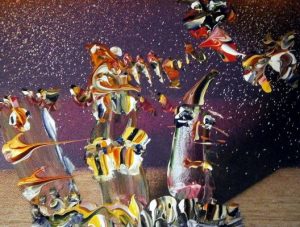 What are the top artists?

Jackson Pollock (1912-1956), is considered the pioneer of this movement, born in Cody, United States, developed the technique of the scattered and drip (splashing and dripping), which is throwing paint at the canvas or let it drip on top of it without sketches, of free way. This painter gets the maturity of his style in the use of large cloths on the floor, which permeated with color (drippings) superimposed and executed jets moving in the vicinity of the box, with an almost frenzied ritual.

Other representative was Willem de Kooning (1904-1997), born in the Netherlands, has the favorite theme to the human figure. Set in New York in 1926 and conducted a masterful collection of women depicted in grotesque way, enhancing the sexual traits in a chaotic technique of violent strokes of color. Similarly, Mark Rothko (1903-1970), born in Latvia, emigrated to the United States and was considered an autodidact of painting in New York, on the basis of nearly all of his most recent painting in the confrontation of two rectangles.

For his part, Arshile Gorky (1904-1948), Armenian birth, after that his mother was a victim of genocide by the Turks, migrated to the United States, also essentially self-taught, has two famous paintings titled “Golden coffee and liver is the” peine del Gallo”, highlighting them expression through color.

Also highlighted in this pictorial movement of abstract expressionism painter Esteban Vicente, who used the newspaper paper, charcoal, graph and cellophane on paper pasted on cardboard, making collages that was where most stood out and was in this technique that made his greatest contribution. This painter is also your use of the piece of paper as a mass of colour and their tears as brushstrokes in a strongly graphic result. 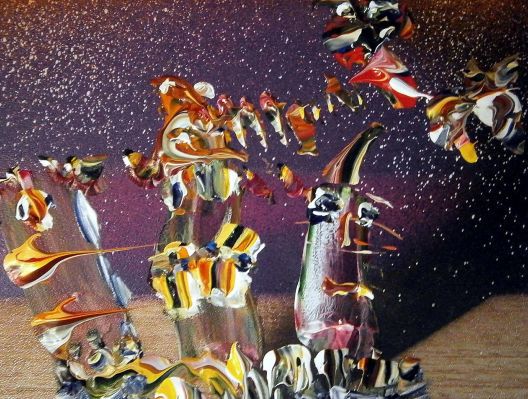