What is Oil Painting?

Oil painting is a technique that uses a medium consisting of pigments suspended in dry oils. The extraordinary ease with which the fusion of tones or color is achieved makes it unique among fluid painting mediums, while at the same time, a satisfactory linear treatment and sharp effects are easily obtained. Opaque, transparent and translucent paint is within its range, and is unsurpassed for texture variation.

Artists’ oils are made by mixing dry powdered pigments with selected refined linseed oil to a hard paste consistency and grinding it by heavy friction in steel roller mills.

Color consistency is important and the standard is a soft, buttery paste, not stringy or long or sticky. When the artist requires a more fluid or mobile quality, a liquid painting medium such as pure gum turpentine should be mixed with it. Likewise, to speed drying, a liquid siccative is sometimes used.

Most oil paints made before the 19th century were constructed in layers. The first layer was a uniform white field of thinned paint called a ground. The ground subdued the dazzling white of the overlay and provided a base of soft color on which to build the images.

The shapes and objects in the painting were then roughly blocked out using shades of white, along with neutral gray or green, red or brown. The resulting masses of monochromatic light and dark were called underpainting. Shapes were further defined using solid paint or rubble, which are irregular, finely applied layers of opaque pigment that can impart a variety of painterly effects.

In the final stage, transparent layers of pure color called glazes were used to impart luminosity, depth and sheen to the forms, and highlights were defined with patches of thick, textured paint called impastos.

The most popular type of oil paint is the one that uses linseed oil in the paint because unlike other vegetable oils such as olive oil or canola oil, it dries by oxidation. Linseed oil is not the only drying oil; safflower oil, poppy seed oil or walnut oil can also be used, depending on the gloss, drying time and other effects required by the painter.

However, linseed oil tends to dry faster and, in the process, forms a more flexible paint film that can be reworked more easily. It is also important to note that pigments do not dry at the same rate and charcoal black oil paint, for example, tends to dry more slowly while red/yellow ochre hardens much faster. 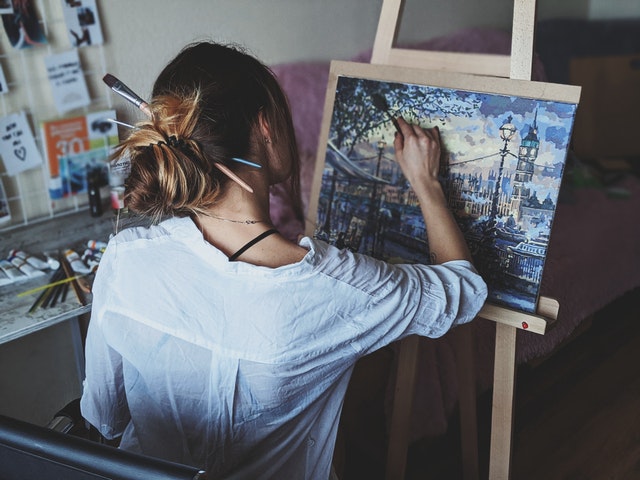 The main advantages of oil paints are their flexibility and depth of color. They can be applied in many different ways, from thin glazes thinned with turpentine to a thick, dense impasto. Because it is slow to dry, artists can continue to work the paint much longer than other types of paint.

The technical requirements of some schools of modern painting cannot be realized by traditional genres and techniques, and some abstract painters, and to some extent contemporary painters of traditional styles, have expressed the need for an entirely different fluidity or plastic viscosity that cannot be obtained with oil paint and its conventional additives.

Some require a greater variety of thicker, thinner applications and a faster drying rate. Some artists have mixed coarse-grained materials with their colors to create new textures, some have used oil paints in much heavier thicknesses than before, and many have resorted to using acrylic paints, which are more versatile and dry quickly.

If during the 15th century artists used oil painting on panels in the traditional tempered style of line drawing, 16th century painters, especially in Renaissance Venice which emerged as Italy’s main center of oil painting, quickly learned to exploit the basic characteristics of oil painting, particularly in its use of successive layers of glazing, while linen canvas replaced wood panels as the most popular support. Among the leading exponents of oil painting in the 16th century were colorists of the Venetian school of painting such as Veronese (1528-88), Titian (1487-1576) and Tintoretto (1518-94).

The beginning of modern art, the 19th century, showed a number of innovative styles of oil painting, all greatly enhanced by improvements in quality, range, pigments and improved oil paint manufacturing technology.

One legacy is the plein air painting movements such as the Hudson River School (fl.1820-75), Luminism (fl.1850-75) and Impressionism (fl.1870s) which benefited significantly from the invention of the collapsible tin paint tube by American artist John Rand in 1841, which resulted in more pre-mixed colors being available in a medium that was convenient for plein air painting.

One of the masters of the 17th century oil technique was Diego Velázquez, a Spanish painter in the Venetian tradition, whose brushstrokes, shown very sparse but very informative, have been frequently imitated, especially in portraiture.