What is Gothic Architecture?

Gothic architecture is a discipline that emerged through Gothic art, a kind of art that emerged halfway between Romanesque art and Renaissance art and that originated in a large part of Western Europe in the Late Middle Ages (from the 12th century to the 15th century).

When we speak of the term “Gothic” we refer to a concept that came from the word gothic. This term was used in a derogatory way to refer to the architecture that was developed in the Renaissance period by the Goths or barbarians and whose elements used to be disorderly and confusing in contrast to the perfection and logic of classical art.

Two of the most characteristic structural elements of Gothic architecture were the ribbed vault and the pointed arch. In addition, they also frequently used some exterior buttresses through the flying buttresses that resulted in several walls without any supporting load and were completely free to cover them with different decorations such as stained glass or rose windows, among other things. 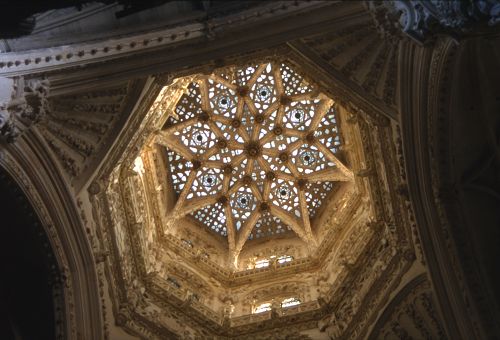 When we talk about gothic architecture it is inevitable to talk about gothic art since gothic architecture is a discipline of this style of art, therefore its origin is very similar to the origin of gothic art. Gothic architecture emerged as such in the north of France in the middle of the 12th century, to be more exact in the year 1140 when the construction of the Basilica of Saint Denis began. However, long before the origin of Gothic art, some influences could already be observed, for example in the 11th century with the construction of Durham Cathedral in England, which used a Gothic structure.

When this style of art and architecture emerged there was a period of transition where this style had a great influence of the romantic style and that could be seen in the form that possessed their works of art, especially in architecture.

Characteristic buildings of this type of architecture

There are some buildings that characterize this architectural style, these buildings can be divided into two themes: civil and religious.

Within the civil architecture we can observe the economic level that existed in the late Middle Ages. Within the military architecture, walls and castles were built with bridges and gates in the middle and at the ends. On the other hand, we can observe a consolidation in civil architecture in front of the ecclesiastical or “lordly” power with constructions that were destined to the municipal governments among which some constructions of Florence and Siena stand out. In addition, the construction of commercial auctions, universities, private homes, urban palaces, among other things that stood out in the 15th century, also evolved.