What is the Exoskeleton in Architecture?

The concept of Exoskeleton was taken by Architecture and also by mechanics and robotics, from the field of Biology, from nature. Therefore, the term skeleton comes from Greek, which means desiccated. Among several definitions, the American one stands out for its distinction between endoskeleton and exoskeleton. Hence, the term skeleton in architecture refers explicitly to a framework that supports a whole, while the distinction endo/exo refers, in addition, to a tectonic quality.

Initially the skeletons of the buildings were made of steel and concrete, simultaneously defining the visionary space and urban propositions of the mega-structure of the 20th century.

Definition of the Exoskeleton in Architecture 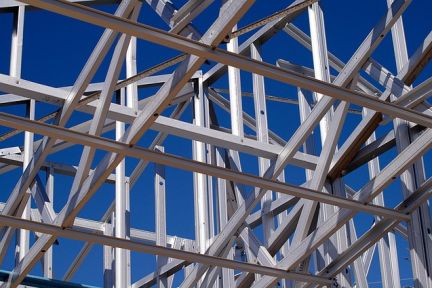 Characteristics of the Exoskeleton in Architecture

The steel skeletons that arise in the industrial revolution, create a direct relationship between man and nature and between man and the city. They are the framework of the new metropolis and reach their peak in the proposals for skyscrapers in Berlin by Mies Van der Rohe. These skeletons are compared to the X-rays of the human body made in the 20th century. The exoskeleton being the essence of the architectural space. Therefore, the continuity between inside and outside is achieved through the horizontal space stripped of the facade, reduced to its minimum expression, i.e. the glass membrane, thus making the structure evident, since, what interests to highlight is the tectonic quality of the articulation of a metal skeleton as a precursor of a spatial system. Therefore, the exoskeleton speaks here of the monumental character and scale of the architectural work. This desire for the new monumentality and structural rationalism will be key to the understanding of concrete skeletons throughout the 20th century.

The exoskeleton is dimensioned from the so-called Diagrid Architecture, known with this name to the structural design where immense buildings are erected based on steel frames, with triangular supports and large beams. This type of design was created because it has economic and space advantages, since less support material, either steel or concrete, is used than any other traditional building. Also, with this type of building there is more space than a conventional building of the twentieth century, since the exoskeleton system provides a larger area than other buildings. A clear example of these types of structures is the “Hearst Tower”, designed by architect Norman Foster, located in New York. Other elements that replace the exoskeleton system in this type of constructions are the large columns. Therefore, there are many buildings that have been erected with this technique such as “the Grerhin”, which in Spanish means the gherkin, which was also designed by Foster and erected in London, at 30 St Mary Axe Avenue.

Background of the Exoskeleton in Architecture

The gothic space, or vertical space, is created with the continuous structural line of stone thanks to the figure of the architect-engineer (which will be Mies in the twentieth century). This is able to strip the architecture of unnecessary elements for the achievement of space, leaving the skeleton. While in the Renaissance, it gives way to the figure of the architect-humanist (which will be Le Corbusier in the twentieth century), putting the structural issues to the background, giving prominence to the compositional and those of the manipulation of light through the mass. Thus the skeleton in architecture will disappear for four centuries. This fact is due to technical reasons that hinder the development of the Gothic skeleton after exhausting the geometric rules of proportion that gave structural stability to the stone in the buildings belonging to this period. These concepts have their bases since 1638 when Galileo posed the problem of calculating the forces of a cantilever beam, taking the material to its stress limit point. And it was not until 1826 that Claude-Louis Navier put forward the theory of material plasticity. Both approaches will be key to all subsequent engineering and architectural production with the creation of the exoskeleton concept.

Generalities of the Exoskeleton in Architecture

The exoskeleton is also used from the mechanical point of view as a substitute for the human skeleton, and is composed of legs, a trunk and arms, but of larger size, so that the person using it is protected inside, each body member being attached to its homonym of the exoskeleton. Likewise, what makes this exoskeleton useful and viable are the special materials of the structure, which are light but highly resistant. Likewise, the joints have advanced motors that give great strength to the set allowing the person to lift weights of up to 300 kg effortlessly.

In this case, the architecture of the system is also key, since it allows the support point for the movement, and the weight of the device itself, rests on the ground and not on the body of the person. Likewise, the key to the control system is a processor capable of identifying the person’s intentions very quickly, and matching their movements in a coordinated manner. Likewise, this exoskeleton system is an efficient, autonomous power supply system based on a technologically advanced system of lightweight, high-powered batteries, connected with an umbilical cord to the external power supply device.

Exoskeleton in Architecture, Definition and Features