Etruscan architecture at that time was located in Italy, between the Tiber and the Arno (part of Tuscany and northern Laccio today). Therefore, its appearance is marked at the beginning of the VIII century and its origin is not very well defined. However, there are two theories about the birth of this civilization, one, supported by Dionysus of Halicarnassus, dating from the first century B.C., who affirms that the Etruscans were an autochthonous group that progressively developed their own culture. However, the other, supported by Herodotus, from the 5th century, maintains that they were immigrants from Asia Minor.

Thus it is considered that the Etruscan people was a group, at first, rather small, which then spread throughout the area creating cities. Therefore, the most important Etruscan cities were Cerveteri, Perugia, Arezo, Volterra, Vulci, Orvieto, Tori, Betis, Tartinia, as well as Ciusi, which reached their peak between the VII and VI centuries. In the same way, at the beginning the cities of Etruria were governed by kings and then the system of government changed to oligarchies, considered a people of great vigor that progressively dominated its neighbors. Thus, after numerous wars there was a period of peace in the middle of the 3rd century and it is from that moment on that Rome imposed itself, making them disappear. Leaving however in memory their culture and architecture. 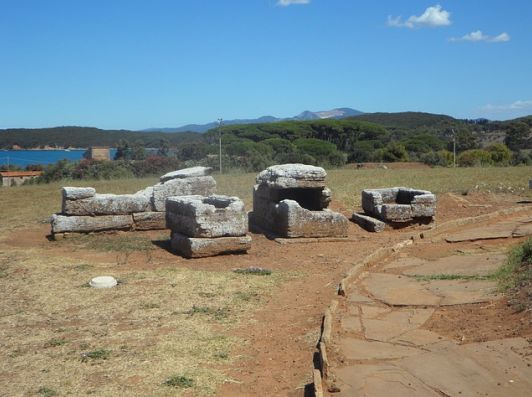 One of the characteristics reported as distinctive of this culture and its architecture is the use of adobe in the construction of houses and stone in the construction of temples.  Therefore, the design of the houses had a square floor plan with a wooden structure, protected by painted terracotta slabs. Nevertheless, they knew the semicircular arch, the barrel vault and the dome, techniques that were learned from the East. In addition, the Tuscan order predominated in their constructions, including in the planning of the cities canals to drain low areas and defensive stone walls. The funerary constructions in the form of hypogeum also stand out, and for the construction of temples they were inspired by the Greeks, highlighting some differences.

How did Etruscan architecture develop?

The most important aspect of Etruscan architecture is its enormous development in urban planning, highlighting very important aspects in the way of conceiving the cities, the way they were built and organized, the shape of the walls, the conformation of the gates, and their sanitation system, as well as the layout and shape of the temples. Being imitated in the Roman mausoleums that derived from the Etruscan tumuli, standing out also, the use of the arch and the vault.

The religious influence was notable in this culture, manifested in its concern for the afterlife and it is believed that the roots are in the Villanovan culture, which emerged in the first Iron Age and continued until the eighth century. Eastern and Greek influences can be seen in their art, particularly in the archaic stage, which they fuse and recreate with the one they developed.  Likewise, the material used by Etruscan architecture was stone, but of poor quality, mostly as reinforcement (in bases and angles), so they did not use marble, but wood, especially for the roofs, in addition to fired brick and tapial. 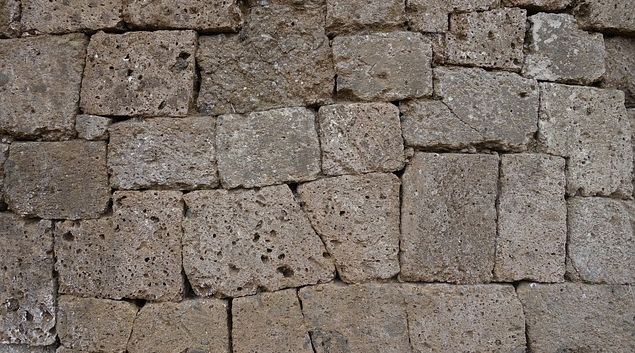 How is Etruscan architecture classified?

From the religious architecture, from the 6th century, the predominance is the Etruscan temples that were located outside the cities, in the esplanade, in an elevated place. At first, it was an open place symbolically delimited. Later, the Etruscan temples were covered and were quadrangular and consisted of a triple cella, built on a stone base and the rest, made of poor material, but covered with polychrome ceramic plates.  Likewise, the access had a stairway in the front, continued by columns forming a vestibule or atrium. Other times there were also columns on the sides, but not at the back. Likewise, the structure was linteled and the exterior was finished with a double slope. In the same way, the covering is unique for the three cells, to think that the central one is wider and there was a front, where the terracotta sculptures are placed. Thus, the Etruscan temple shows important differences from the Greek in the lack of krepis, the absence of proportions, the triple cella and the lack of rear portico.

In civil architecture, the Etruscan quadrangular city, divided into grids and surrounded by a wall with main entrance gates leading to two main intersecting streets, stands out. The gates of the city were simple and opened between two towers with semicircular arches in which there were genii acting as protective gods in the keystone and on the battlements. Likewise, the wall was made of stone set in stone.  Similarly, the houses were very simple, similar to circular huts made of tapia and covered by branches, then the housing changed in the eighth century, passing to quadrangular houses, whose shape was imitated and later inherited by Rome. Another characteristic of the houses is that they had a central courtyard around which the rooms were located, with a single entrance door, with a courtyard that had an impluvium in the center and the roof was hipped inward, sometimes varying in despluvium, with the roof with four waters to the outside. Another form of design was the roof covering tiles, flat with columns made of poor materials and other times, of wood.

What is the legacy of this Architecture?

The main legacy of Etruscan Architecture was to serve as a frame of reference for Roman architecture, resulting in an eminently practical architecture at its best. Hence, Roman art has artistic elements, both in architecture and sculpture, similar to the Etruscan civilization. Thus, its close connection with the Roman development, in terms of formal elements and constructions are visually antecedents of its greatest legacy in this part.  The heritage given to the Romans was not only in iconography but also involves technical elements such as the semicircular arcade.  Similarly, the urban planning of the Etruscans stands out for its principles of organization and adaptation to the resources of the site. This approach left a strong influence on the Romans, since Etruscan arches and pilasters are elements that would later become fundamental in Roman civil architecture. 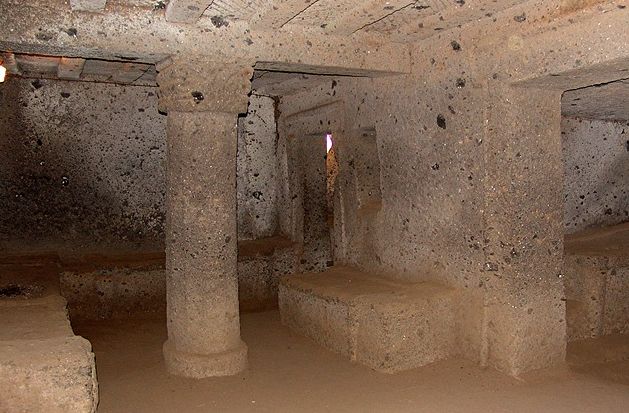 Types of this Architecture and the most representative examples

The Etruscan religious architecture, rather focused on the funerary, has three types of necropolis or catacombs that characterize and define it, the hypogeum, edicule and tumulus covered by a false dome and vault, the best known being the famous catacombs of Tarquinia and Cerveteri. Some emblematic ones are briefly described below:

The Tomb of the Roaring Lions

This structure is a tomb dating back to the 7th century B.C., built by the Etruscans, destined to a prince, perhaps an upper class personage. It is considered the oldest and is decorated with paintings.

The Hypogeum of the Volumni

(Ipogeo dei Volumni) Etruscan hypogean tomb of the mid-second century BC, found in the city of Perugia.  It was the tomb of the family of Arunte Volumnio (Arnth Veltimna Aules in Etruscan language) located in the necropolis of Palazzone. A large archaeological area that presents a number of subway tombs and a museum that collects urns and other vestiges found on the site. It has all the characteristics of a hypogeum of the Etruscan civilization, consisting of an access through a corridor with stairs (dromos) that descends a few meters below the surface, with the entrance door at the end. After the door opens a wide hallway, from which one enters four side chambers and three central chambers, which are larger, containing the main urns with the remains of the heads of families. In particular, the Arnth urn is made of travertine on which the deceased is drawn on the lid or triclinium.  Thus the roof of the hypogeum has an inclined shape.

It is an edicule and were built outside the earth, pretending to be a kind of miniature temples, this form of temple, within the Etruscan symbolism represented the intermediate point of the journey that the deceased must have made from life to death, as the last stage of earthly life.

The Tumulus of the Pietrera

It consists of a large artificial hill, circumscribed by a probable tambour of 60 m. in diameter, and rises about 14 meters high. The tomb complex consists of a main chamber of rectangular plan with a central pillar accessed through dromos or corridors.

Originally called Vetulonium or Vatluna, it was an ancient city in Etruria, Italy, now occupied by the town of Vetulonia, and dates back to 1887 with the name Colonnata and Colonna di Buriano. This place is currently a fraction of the community of Castiglione della Pescaia, which has only 200 inhabitants. It is located 300m above sea level.