What is Encaustic Painting?

Encaustic painting is also known as wax painting, used since ancient times, and is characterized by being a painting technique that uses colors diluted in molten wax, that is, using beeswax as a binder. This paste is used hot and is generally applied on wood.

The process of encaustic painting consisted of placing on heated metal plates, wax breads mixed with pigments of different colors, then spread with a brush the wax extracted from one of these plates. This technique was used both for decoration and probably for protection.

The use of wax painting dates back, as far as is known, to the portraits of the Fayum, dated from the 1st to the 5th century in Egypt. These works and paintings, intact, on sarcophagi prove, by their persistence, the resistance of this type of work to time.

Wax was used for the first time on ivory pushed back with a needle, and the way to use it was discovered with a brush, after having liquefied it by heating it, which made it possible to paint the ships in such a way that the color resisted the sun, the salt and the wind.

To protect a cinnabar painting from discoloration by light, it was coated with a layer of melted wax mixed with oil with a brush, which was then heated until it sweated, and finally smoothed with a candle and a cloth.

Encaustic as a technique is used on wood, which it decorates, nourishes and protects. It is also used on stone, plaster, coatings, tiles, statues, among other surfaces.

It is sufficient to use only the colorless for example on visible stones or interior plaster to stop dust, passing several coats if necessary. Unlike other products, encaustic allows the wood or any other material it protects to breathe.

Another type of quality encaustic is the product based on turpentine and a mixture of waxes (beeswax, carnauba, candelilla). These various waxes that make up the encaustic in this case, each have their unique properties that, depending on the quality, can be used even in cosmetics.

Therefore, if no other additives are added, the base encaustic is colorless, which can then be colored with colorants (in principle natural pigments) according to the desired shade (light oak, medium oak, dark oak, mahogany, cherry, among others). 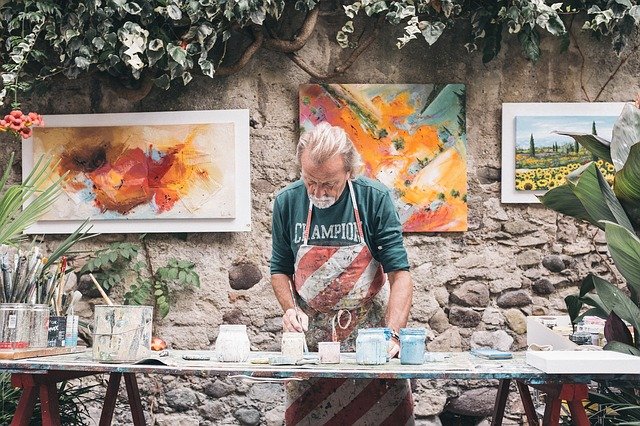 Unlike some very polluting paints, such as glycerol paints, wax paint is perfectly natural and environmentally friendly. However, this type of product requires an important preparation, especially if you want to melt the pigments in it.

To obtain colored encaustic paint, it is necessary to select the natural pigments that have grip, mixing about 5% of the pigment in a closed and unmixed jar leaving them in turpentine for 15 hours, so that they are absorbed, then put a tablespoon of colorless linseed oil and mix until a uniform paste is obtained.

Currently, encaustic painting uses a more modern process of wax saponification, for example with turpentine, to create a very stable alkaline emulsion medium, which allows working on enamels and veils, as well as using its covering power. The possibilities of technical variations and its compatibility with modern media make wax painting one of the most flexible and durable in the history of art.

Hawara (100-110 AD), is one of the Fayum portraits, using encaustic wax paint. This term was then used in the 19th century (1845) to refer to a mixture of wax and turpentine that was also used to maintain and polish furniture, as well as floors.

Today, painters such as Philippe Cognée use this technique by placing encaustic paint, made of beeswax or simple beeswax, with colored pigments on the canvas using a brush, and then covered with a plastic film on which an iron heats the wax to liquefy it, spreading and deforming the figures.

This has the effect of creating a blurring of the subject in the material. The plastic film when peeled off produces in certain places lacks due to the tearing of the pictorial layer. The image then appears to be trapped under an icy surface.

Another painter who uses the encaustic painting technique is Bruno Gripari. Paul Rinaldi also uses it, but with the variant of encaustic with acrylic, as well as the French artist Amélie Caussade.

The Fayum portraits, named after the Egyptian region where they were produced in the first centuries, are considered representative of this painting technique.

Likewise, in Greco-Roman Egypt, from 100 BC to 200 AD, these realistic portraits were painted during the person’s lifetime and then placed in the sarcophagus to accompany the body in its spiritual life after death.

Not all portraits were intended for mortuary purposes, but it is these portraits, painted on wooden panels, that have survived the passage of time. Likewise, the materials used by the Fayum painters resemble those used today, which are beeswax, pigments, and resin.

The tools used are brushes, a cestrum which are tools for engraving and the cautery used to melt the layers of wax. While most of these portraits are painted with encaustic, others are made with a wax emulsion, Punic wax which is beeswax boiled with seawater and potassium carbonate and then bleached in the sun.