This architecture owes its name to the region of its origin, in the city of Babylon in lower Mesopotamia. Characterized by the oldest monuments found on stepped platforms that probably served as a framework for the oldest Egyptian pyramids. Thus, the ruins of the architectural monuments explored in Mesopotamia seem not as ancient as the pyramids of Egypt, since other remains of the civilization found in those regions are known to be of greater antiquity than those on the banks of the Nile.

Chaldean-Babylonian Architecture, belongs to an ancient culture that was established in Mesopotamia, between the Euphrates and Tigris rivers. Therefore, Babylon was also known as Chaldea and was divided into Akkadia, the upper part and Sumer, the lower part.  The meaning of the word Babylon is “The gate of God”. Likewise, what characterizes the buildings of this architecture according to the remains found today by archaeologists, are the ornamental motifs that were widely used, which were distinguished by the palmettes, fretwork, rosettes, pineapples, and the actions of hunts and warriors. Likewise, another characteristic of this architecture is the materials used for construction, such as marble, alabaster and plaster, in small quantities. In addition, the buildings were specific, called ziggurats, highlighted as the zenith of Babylonian architecture. Likewise, already in the activity, they were built according to the links they had with the stars and religion. Therefore, Babylon was considered the sacred mountain, the origin of the earth and fertility, the place where they resided and could communicate with the gods. 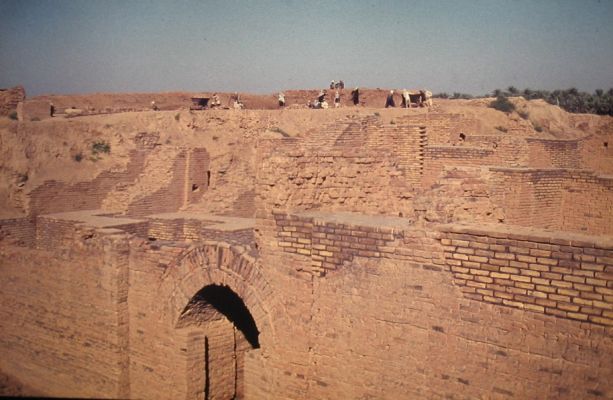 How did Chaldean-Babylonian Architecture develop?

This architecture belongs to two civilizations, the Chaldeans and Babylonians who lived in the southern part of Mesopotamia in sandy and low territories. Therefore, due to the scarcity of stone, these peoples were forced to use bricks (adobe and fired) for their constructions, which proved to be weak and perishable over time, which is why only the ruins of some of their most important constructions have survived until today, and little is known about their architecture. Likewise, the Chaldeans influenced the Assyrians who lived north of Mesopotamia in a mountainous area, a region where stone was available, however, because the Assyrians ended up dominating the Chaldeans, they practically did not use stone in their constructions despite having it available, because they were influenced by Chaldean architecture whose use of stone was limited to the lining of walls built of adobe or fired bricks. Therefore, the vault is the most important contribution of the Chaldeans to this architecture.

How is Chaldean-Babylonian architecture classified?

This architecture has two periods according to the civilizations settled in that area:

Made by the Assyrians who were great warriors and each sovereign wanted to build his own palace, built to glorify Assur. Therefore, on the walls of these palaces were left the inscriptions of the history of the kings through clay tablets, bas-relief, sculptures and paintings.

It refers to the architecture used in lower Mesopotamia, the most important buildings being the primitive towers of stepped platforms, which served as a model for the ancient Egyptian pyramids.  Likewise, other notable constructions of Chaldean art in this early period of the empire, in addition to the walls and irrigation canals, were the towers called ziggurats that served as temples and tombs. They also built palaces and castles which have been studied to a lesser extent.

What is the legacy of Chaldean-Babylonian Architecture?

From the architectural point of view, the Neo-Babylonian period produced the variety and splendor in the artistic and architectural representations that would take place and continue until the fall of the Empire. In this period, which began in the year 2000 B.C., advances of great importance for architecture are observed, among which are the improvement of the use of the arch and the vault, which were already in use but were perfected during the Neo-Babylonian Empire. During this period, the fabulous palaces of Nebuchadnezzar, the important king of Babylon, were built. Thus, the flourishing of Babylon is attributed as a great merit to this king. So they were found on clay tablets engraved with cuneiform writing, written by the same king, of all these achievements.

Most representative example of Chaldean-Babylonian Architecture

The most emblematic construction of this architecture were the adobe walls, irrigation canals, palaces and temples. The most important buildings were religious buildings such as the Ziggurat, which were staggered buildings made by means of superimposed plateaus. Likewise, closely related is also the Assyrian architecture, especially for the type of materials used such as adobe and stone, highlighting the buildings in the form of palaces and also the fortresses with sculpted porticoes. Some illustrative examples can be seen below: 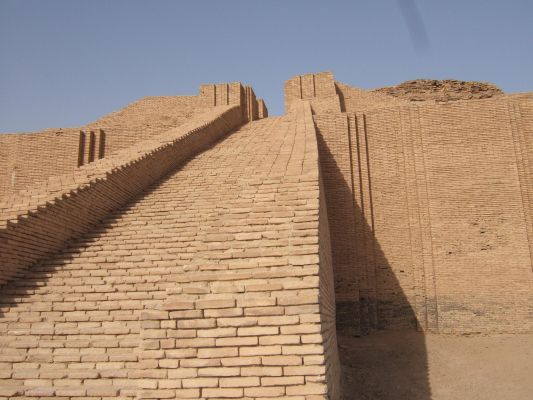 For the Chaldean-Babylonian civilization, the Ziggurat was a stairway that allowed them to communicate with the celestial world of the gods. Quite similar to modern skyscrapers and medieval cathedrals in their height and majesty, the ziggurats of ancient Mesopotamia represented the buildings of the great cities, visible from afar in a plain-like region located between the Tigris and Euphrates rivers.  Thus, these stepped towers symbolized not only the might and splendor of the city, but also the eminence and grandeur of its chief god. Likewise, the name “ziggurat” derives from the Akkadian verb zaqaru, meaning “to build on high,” a descriptive that reveals little of the true meaning and function of these unique buildings. However, despite information in both literature and art about the famous tower of Babel (the great ziggurat in the city of Babylon, dedicated to Marduk), no ziggurat has been found in full and complete form.

Which are the most important artists and/or representatives?

In the Chaldean-Babylonian Architecture, there are no individual architects per se, rather it is an artistic current that flourished between 612 and 539 B.C. during the Chaldean domination of Babylon. This period is also called Neo-Babylonian because it signifies the return to power of the Chaldean-Babylonians after the defeat of the Assyrians. It is also characterized by the splendor and magnificence of the buildings. King Nebuchadnezzar (604-562 B.C.) ordered the construction of several of these sumptuous palaces and temples, covered with glazed bricks. Thus, under his reign were also built the famous Hanging Gardens of Babylon, as well as an avenue from the Ishtar Gate to the temple of Mardak, lined with walls unprecedented in the ancient world for the splendor of the decorations. However, the conquest of Babylon in 539 by Cyrus the Great of Persia ended the artistic and political independence of the Chaldeans.