Anamorphosis in the visual arts, is an ingenious perspective technique that gives a distorted image of the subject depicted in an image when viewed from the usual point of view but is executed in such a way that if viewed from a particular angle, or reflected in a curved mirror, the distortion disappears and the image reflected in the mirror image, appears normal.

The concept of derives from the Greek word meaning to transform, so, the term anamorphosis was first used in the 17th century, although this technique had been one of the most curious by-products of the discovery of perspective in the 14th and 15th centuries.

Leonardo da Vinci is considered to be the first to use anamorphosis, because the first examples appear in his carefully kept notebooks of his techniques and inventions. His use of anamorphosis was considered a display of technical virtuosity, and was included in most drawing manuals of the 16th and 17th centuries.

Two important examples of anamorphosis are a portrait of Edward VI (1546) that has been attributed to William Scrots, and a foreground skull from Hans Holbein the Younger’s painting of Jean de Dinteville and Georges de Selve, The Ambassadors (1533). Many examples are provided with special openings through which the rectified view first avoided by the viewer can be seen.

There are several prisms in which anamorphoses are reflected, which can be spherical, cylindrical, conical, pyramidal, spherical concave, paraboloid or paraboloid concave. George Rousse performs this type of anamorphosis in an impressive way.

There are several forms of aesthetic anamorphosis and some of them are described below:

This type of anamorphosis requires the viewer to move into a precise position to unravel the illusion.

Catoptric anamorphosis is the art of painting a seemingly meaningless drawing, which, when viewed through a mirror, will reveal its true meaning. This is what Regine Detamble explains in her presentation of Depraved Perspectives. There are several prisms in which the anamorphoses are reflected, which as mentioned above have various forms.

Tricking the architectural eye by anamorphosis

George Rousse achieves this type of anamorphosis in an impressive way, by accommodating geometric figures. 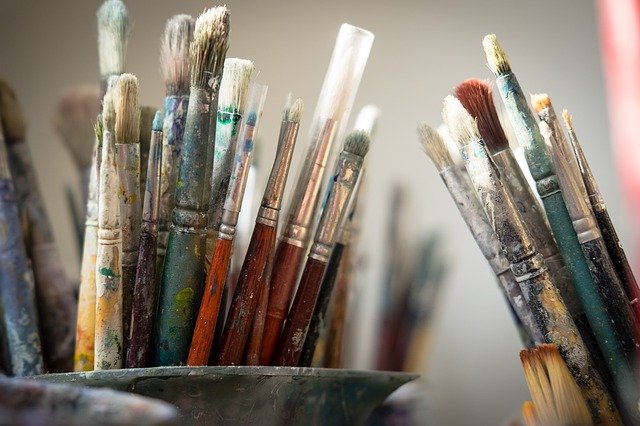 A modern equivalent of anamorphosis is the so-called Ames Room, in which people and objects are distorted by manipulation of the contours of the room in which they are viewed. This and other aspects of anamorphosis received much attention in the 20th century by psychologists interested in perception.

There are two types of lenses that can be used in filmmaking, spherical lenses and anamorphic lenses. Spherical lenses are the type we all use most commonly and pass the image to the sensor or film without affecting the aspect ratio.

However, anamorphic lenses distort the image, squeezing it horizontally while leaving the vertical aspect unaffected. Anamorphic lenses were developed to utilize the entire 35 mm film frame, compressing the image horizontally by a factor of 2, while utilizing the full height of the frame. When the finished film was projected in a theater, the projector lens would unravel the image into the correct proportions.

Perspective or turning images were especially popular in the 16th and 17th centuries. Stuart Clark’s 2007 book Vanities of the Eye, Vision in Early Modern European Culture, describes that these swirling paintings were regularly used for religious subjects, noting that the 17th-century French theologian Jacques-Bénigne Bossuet claimed that anamorphic images were the perfect natural emblems of a world whose righteousness, hidden behind appearances, was impossible to see except from a certain point revealed by faith in Christ.

The 17th century fresco in Trinità dei Monti at the top of the Spanish Steps in Rome shows where a 65-foot landscape is transformed into a portrait of one of the saints in the picture St. Francis of Paola. So, you can see the scene change from a rustic setting to a saint in this video from the National Gallery of Art.

Hans Holbein is well known for incorporating an oblique anamorphic transformation in his painting The Ambassadors. In this work of art, a distorted shape lies diagonally across the bottom of the frame. Viewed from an acute angle, it transforms into the plastic image of a human skull, a symbolic moment of death.

During the 17th century, Baroque trompe l’oeil murals often used anamorphism to combine real architectural elements with illusory painted elements. When a visitor views the artwork from a specific location, the architecture blends with the decorative painting.

Artists and architects in the 21st century continued to experiment with anamorphic designs. In 2014 Swiss artist Felice Varini-known for his large anamorphic installations-created Three Ellipses for Three Locks, for which he painted three ellipses, segments of which covered roads, walls, and nearly 100 buildings in the historic city center of Hasselt, Belgium. The design became coherent only when viewed from a particular point of view in the city.